The Latest from Samsung Semiconductor
by Tom Dillinger on 10-29-2018 at 12:00 pm
View Profile
View Forum Posts

Earlier this Spring, Samsung Foundry held a technology forum, describing their process roadmap and supporting ecosystem developments (link). Recently, the larger Samsung Semiconductor organization conducted a Tech Day at their campus in San Jose, presenting (and demo-ing) a broader set of products. The focus of the day was on Samsung memory technology, encompassing non-volatile flash, DRAM, and GDDR roadmaps. The audience was more focused on system design and integration than silicon process technology, and the key Tech Day announcements reflected new Samsung memory products being introduced. (Samsung Foundry also made a major announcement.) Here are the highlights from the Samsung Tech Day.

Interesting Facts, Figures, and Quotes
In addition to the product introductions, there were some “sound bites” from the presentations that I thought were quite interesting:

The focus of these examples was the requisite data capacity and bandwidth required of the current set of workloads. The key conclusion was:

“In the past few decades, computing evolved to a client-centric model. We are now moving to a memory-centric compute environment.”

“A significant percentage of the (unstructured) data being generated for analytics is ROT – redundant, obsolete, or trivial. A requirement for these memory-centric, data-driven applications will be to optimize the working dataset.”

Here are the major product announcements from the Samsung Tech Day.

Samsung introduced the 16Gb DDR4 DRAM in 2017, utilizing their “1y nm” process technology. At the Tech Day, a 256GB “3D stacked” Registered DIMM stick was introduced. Although there’s been lots of attention given to 2.5D and 3D topologies for multiple (heterogeneous) logic die in a package, Samsung has been in production with stacked memory die for several generations – see the figure below. 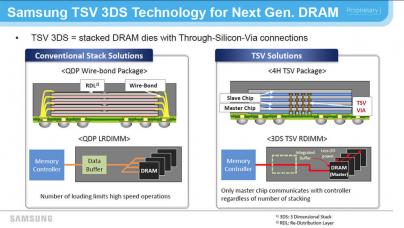 Compared to an equivalent configuration with 2 x 128GB RDIMM, the 256GB RDIMM provides a ~25% power reduction, obviously a key factor in server design.

As the new RDIMM offers 2X the memory capacity in the same footprint, the maximum memory footprint of compute servers is likewise increased – e.g., 8TB in a 32-DIMM, 2P rack-mounted server. “In-memory” database transaction processing capabilities are expanded. For chip design, I was specifically thinking about the EDA applications for SoC electrical analysis, which are now able to accommodate 2X the model complexity, as well.

7LPP in Production
Although the theme of the Tech Day was the synergy between the Samsung Semiconductor product family and “memory-centric computing”, there was a major Samsung Foundry announcement, as well.

Bob Stear, Senior Director, Samsung Foundry Marketing, indicated, “7LPP offers a 40% area reduction, and a 20% performance or 50% power improvement compared to 10nm. We are achieving a sustained exposure power output of 250W, enabling a throughput exceeding 1500 wafers per day. The utilization of single-exposure EUV lithography is truly a big leap in cost-effective production, compared to previous multipatterning-dominated process nodes. The number of masks is reduced by 20%.” 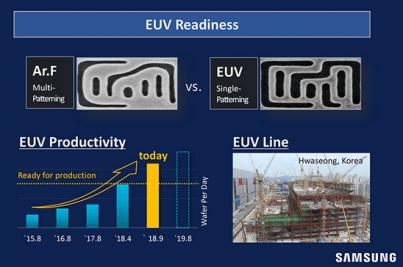 “Smart” Solid-state Drive Architecture
A very unique announcement was the “Smart SSD”, a design that integrates an FPGA into the SSD package.

Xilinx collaborated with Samsung on the product engineering, offering a full application development and software library stack for the (Zynq, with ARM-Cortex core) FPGA integrated into the SSD.

The Smart SSD architecture does present some interesting acceleration opportunities, and also some challenges. The endurance specifications for SSD’s vary significantly.

The system integrator utilizes the anticipated data communications workload profile to match the SSD endurance with the product requirements – e.g., an SSD “boot device” with limited activity (~0.1 – 1.0 effective drive writes per day, DWPD) to hard drive data caching (3++ DWPD). The use of an SSD in a new set of applications, such as providing accelerator engine data, requires new workload profiling and considerations for endurance reliability analysis (and over-provisioning) – a very interesting area for further research, to be sure. (The figure below provides an example of the SSD endurance calculations for Samsung SSD’s – a very interesting whitepaper is available here.) 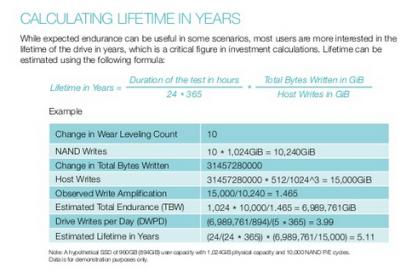 Samsung Semiconductor definitely presented a unique perspective at their Tech Day, highlighting the need to focus on storage capacity and bandwidth for a new “memory-centric” computing environment.