The number one semiconductor IP company in the world is ARM, and they have really figured out how to use social media in a big way to communicate with and listen to their customers. When you first visit the Home page for ARM there are four social media icons displayed in monochrome underneath the menu bar. As you hover over the icons (Twitter, Facebook, YouTube, Google+) you see a color version light up.

Oddly enough, when you click the Twitter icon you don’t end up on Twitter, instead you land on their Social Media page which then lists all of the ways that you can interact with ARM.

There are a total of 11 different Twitter accounts for ARM, it all depends on what your specific interest is. Notice that Lori Kate Smith from Gary Smith EDA tweets @ARMCommunity. 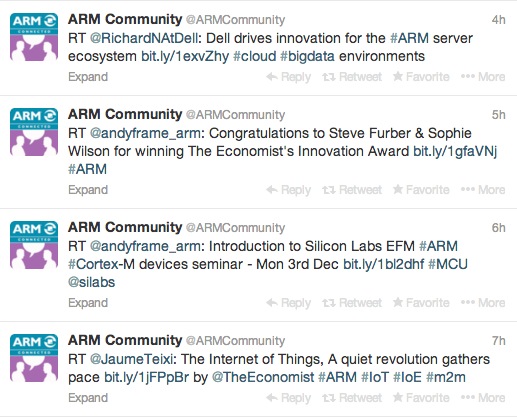 A competitor to Twitter in China is called Weibo, so read from Jenny Su in Chinese at @ARM中国 (ARM Sina)


Clicking the Facebook icon at www.arm.com does bring you to the ARM Fan Page, no surprises. 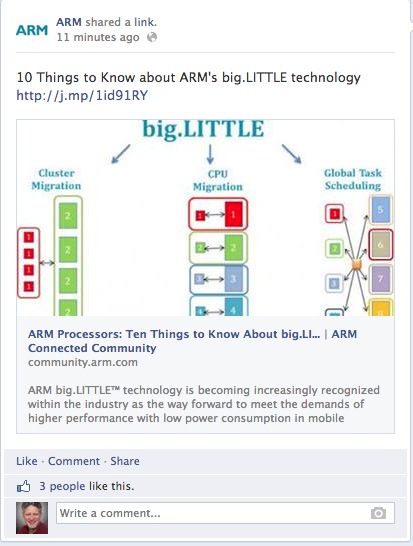 You have three places on LinkedIn to choose from:


Nick Heaton from Cadence loves to post in the ARM Techcon group:

Here you’ll find that 3,744 people have ARM in their Circles. I found that about 1 in 4 articles had actual comments, so it has about as much interactivity as the LinkedIn group does. 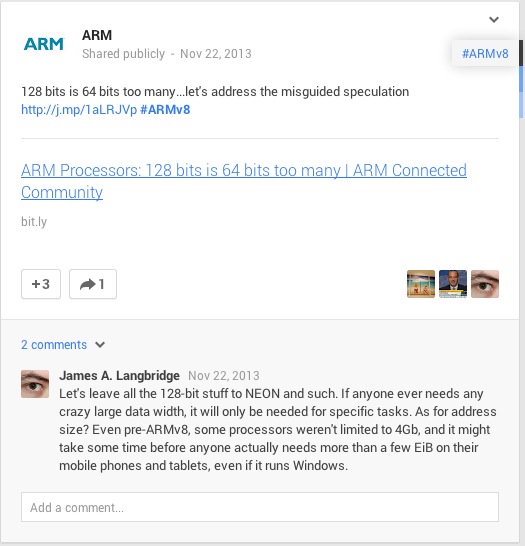 There is a new place for blogging at the ARM Connected Community, a registration-based portal. Their Featured Members are well-known in the social media community, and I recognized: Lou Covey, Colin Walls, Brian Fuller and John Blyler.

The ARM Connected Community just launched last month, and they’ve already hit 1,000 registered users, so this looks like a great start. I liked that you could find your favorite blogger, then follow their RSS feed to get instantly notified of any new blog post.

The YouTube Channel for ARM is lovingly called ARMFlix, and they have a healthy 7,390 subscribers. If you missed TechCon 2013 then watch 46 minutes of the Simon Segars interview at this channel. Many of the TechCon presentations are also available, and each has a few hundred views since October.