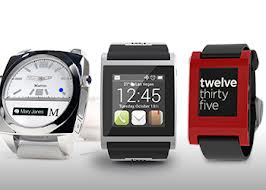 I first read about the Pebble smartwatch earlier this year and thought “I don’t need yet another electronic device, and certainly not one that’s attached to my body.” Then I felt bad. Am I a troglodyte? It’s true, I do still have an iPhone 4, which is a little embarrassing in Silicon Valley. I have also never worn a wrist watch of any kind, but given the onslaught of smartwatches, I wonder how long I’ll be able to hold out. The options are growing, with companies big and small joining the battle for wrist-dominance.

The top selling point for a smartwatch in my opinion, is that it lets you keep your phone in your purse or pocket. The watch will alert you to incoming calls, emails, texts, tweets, Facebook posts, etc. Of course, this is also the main drawback. Another drawback is that none of these companies are able to design a product for women. Some out of this population of “most humans on earth” will don these clunky things anyway, but will still wonder why the smartwatch makers hate them. However, even if I never warm up to the idea, I’m convinced my husband needs one because he seems to miss many of my calls and texts, ahem.

But apparently many of the rest of the population is expected to buy a smartwatch. All the market forecasts indicate this business will go up and to the right; iGR predicts a CAGR of about 195% over the next five years into a $9 billion market. There are dozens in development, and they are also tapping into the growing health/activity monitor market. Most are Bluetooth accessories for your phone; some are standalone wrist computers. The sector is so hot that Qualcomm even has a horse in the race. CEO Paul Jacobs says he doesn’t really want to be in the gadget business, they are just trying to “drive the category forward.”

So, how to choose? I can’t pick based on looks alone (see comments above), I need to know what’s under the hood. Here’s some of my research on smartwatches available now or within the next few months:


The list of available watches is growing as I write this (and I’ve not even mentioned the hordes of ‘fitness’ devices that overlap in many functions with smartwatches.) There the MetaWatch, Casio’s G-Shock, Citizen’s EcoDrive, the Motorola MOTOACTV (now owned by Google), the Cookoo, Emopulse Smile, Kreyos Meteor, Kokkia, SVP G13 (award for catchiest name), and the Omate TrueSmart. Seriously, I can’t keep up so I’ll just stop now. 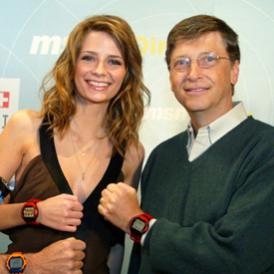 Apple, Google, and Microsoft are also working on their smartwatches. Apple’s smartphone is late, but has copyrightred the term iWatch, patented a “slap bracelet,” and hired a designer of the Nike FuelBand, so hopefully their product will be fancier than the current nerd-approved solution of taping an iPod nano to your wrist. Google bought WIMM Labs, who made an Android smartwatch in 2011 that had Bluetooth and Wi-Fi, 256 MB of RAM and a 667 MHz processor. It will be integrated with Google Now, is supposedly a few months from launch. Microsoft is reported to be in prototype testing phase of its smartwatch. Does anyone remember the Smart Personal Object Technology that Microsoft floated in 2002? Me neither, but I did find this picture. I guess they were ahead of their time.

0 Replies to “The hottest real estate? Your wrist!”