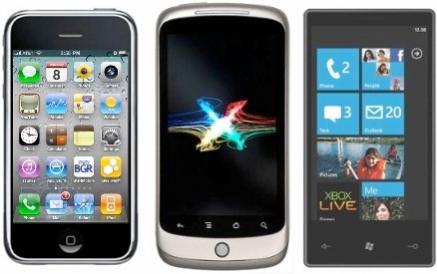 It looks as if Samsung has finally achieved a long-held goal to be the largest handset vendor, taking over from Nokia which has been the market leader for 14 years since 1998 when it passed Motorola. Nokia hasn’t reported yet but they cut their forecast. Samsung had a record quarter. Bloomberg estimates that Samsung sold 44M smart phones in Q1, and 92M phones in total, easily beating 83M for Nokia. Samsung also have a goal to be number one in semiconductor and overtake Intel, which they may well do but not immediately.

Nokia, as I’m sure you know, is largely betting its future on Microsoft and, in the US, on AT&T. It launched its new Lumia phone over easter weekend (when most AT&T stores were closed, not exactly like an iPhone lanuch with people camped out overnight to get their hands on the new model). There were also technical glitches about not being able to connect to the internet, which is a pretty essential feature for a smartphone. My own prediction is that WP7 is too little, too late and as a result Nokia is doomed. But maybe I underestimate the desperate need of the carriers to have an alternative to Android and iPhone that is more under their own control.

Funny isn’t it to look back just 8 or 10 years to when the carriers were paranoid about Microsoft, worrying that it might do to them in phones what they did to PC manufacturers where they took all the money (well, Intel got some too)? In the end it seems that it is then-tiny-market-share Apple that is taking all the money, 1/2 of the entire handset profits by some reports. iPhone alone is bigger than the whole of Microsoft. Samsung is also making good money but all the other smartphone handset makers such as HTC seem to be struggling. Now Microsoft is seen as the weakling, able to be bullied around the schoolyard by the carriers.

I still don’t entirely understand Google’s Android strategy. This quarter, for the first time, over 50% of new smartphones were Android based but Google makes very little from each one and all that is in incremental search. Like the old joke about if all you have is a hammer everything looks like a nail, every business seems to look like search to Google. Amazon is certainly making money with Android, and so is Samsung. There are rumors that Microsoft makes more than Google (through patent licenses to the major Android handset and tablet manufacturers). It remains to be seen what Google does with Motorola Mobility. If it favors them too much it risks alienating its other partners and pushing them away from Android. If it doesn’t favor them at all I don’t see why they should suddenly become a market leader in smartphones.

iPhone5 is expected in June or July. Presumably containing the quad-core A6. Presumably with LTE like the new iPad. But, of course, Apple isn’t saying anything.