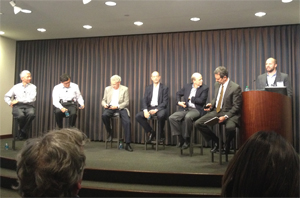 This year the panelists were Ed Cheng from Gradient, Lip-Bu, Aart and Wally (and if you don’t know who they are you haven’t been paying attention) and Simon Segars of ARM (not their CEO, of course). Ed Sperling moderated. Somebody had managed to dig up the fact that at the start of his career he’d been a crime reporter, so that made sure that we only got truthful answers all evening!

The format was completely different from prior years. Instead of each CEO getting up and doing a presentation, instead various questions were discussed. The CEOs had been polled beforehand on their answers and then EDAC members (I’m not sure how many or who, it was a bit unclear) had also been polled. So one of the interesting things was to focus on areas where the CEOs differed from the man-in-the-street. And by ‘man in the street’ I mean design engineers. You’ll get some pretty odd looks even in silicon valley asking a random person in the street when stacking die will go mainstream.

Q1: when will stacking die become mainstream?CEOs were more conservative that their customers, with CEOs going for 2015-2016 and customers with 2013. Although as Ed Cheng pointed out, what does mainstream mean? There are stacked die in most cameras, in most DRAM assemblies and so on already. Everyone agreed that memory on processor, and 2.5D interposer would arrive long before true 3D (meaning punching TSVs through active area all over the die).


Q2: what is the most difficult challenge?CEOs went with integration, but their customers picked software, time-to-market, power and cost. Typing this now I’m not sure if the CEOs meant integration of their tools or integration of IP etc on chips. Certainly in the big EDA companies, integrating tools to work smoothly together now that they have to look forward and back up and down the tool chain is a major challenge.

Q3: what is the most prevalent concern for EDA customers?Everyone picked power, so at least the CEOs understand something about their customers. The CEOs also picked performance but their customers were more concerned with area/cost. Power is an issue right from the architectural level where people are looking for 5-10X reduction (hmm, that’s going to be tough) all the way down to the process where FinFETs are coming, soon if you are Intel, and in a couple of years if you are not.

Q4: what technology challenge will spur the next growth in EDA?Survey says…IP reuse and integration for the CEOs, and hardware/software co-design for the customers. Wally pointed out, as he has several times before, the suprising fact that all the growth in EDA, all of it, comes from new technologies. Something new comes along like place and route, grows fast and then plateaus for a decade while something new builds growth on that base.

Q5: what will EDA look like in 5 years?CEOs picked the same number of major companies but defined differently. Customers predict more startups and more consolidation. Wally noted that the top 3 EDA companies have made up 75% of EDA revenue for 40 years and that will continue although which 3 companies may change (I guess Wally can take pride in being the only member of the DMV, Daisy, Mentor, Valid that survived). Lip-Bu said that some VCs are starting to come back to EDA. I have to say that any companies I’ve been involved with have not seen any signs of this (my feeling is that EDA compaies don’t need enough money to be interesting to most funds, and the exits are too low).

Q6: where will the majority of leading edge designs be done in 5 years?EDA CEOs all picked North America, but about 30% customers picked China. Everyone agreed that on a 10 year timescale, things are a lot less certain. Aart said that a country (think China) goes through 3 stages: competing on cost, competing on competence and finally competing on creativity. China is moving from the cost to the competence era at the moment, I guess.


Q7: who will drive the industry in 5 years?Everyone said system/software companies, but the CEOs also had some love for fabless companies and the customers for foundries and IDMs. To some extent the answer is ‘all of the above’ of course but you can’t ignore system companies, Apple in particular, due to scale. Apple increased its revenue last year by roughly Intel’s revenue. It is an unequal battle.

Q8: will SoCs rely on more cores in a single processor or more processors in 5 years?Pretty much everyone reckoned both, more cores and more processors. The big challenge here is the dreaded dark silicon. We can put the cores on there but can we power them all up?

There were a few questions from the audience. Peggy Aycinena asked that, since this was a forecast panel, what was the forecast for 2012. All the CEOs had given guidance in recent conference calls and Synopsys and Mentor predicted 8.4% and Cadence 8.8%.