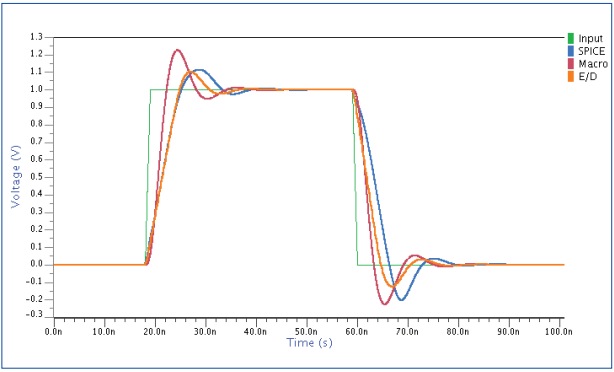 Speeding Up AMS Verification by Modeling with Real Numbers
by Daniel Payne on 02-15-2014 at 7:00 pm
View Profile
View Forum Posts

My first introduction to modeling an AMS behavior using a language was back in the 1980’s at Silicon Compilers using the Lsim simulator. Around the same time the VHDL and Verilog languages emerged to handle the modeling of both digital and some analog behaviors. The big reason to model analog behavior with a language is for improved simulation speeds to boost productivity of both the design and verification phases, but the challenge is to consider the trade-off in accuracy versus a reference like SPICE circuit simulation.

Pulse response of an Operational Amplifier:SPICE in blue, Real Number model in Orange

Coming from a circuit design background I have come to trust the accuracy of SPICE because it models and simulates quite closely to silicon behavior for DC, transient, voltages and currents of both MOS devices and interconnect on analog designs. But who wants to wait one week for a large AMS block to simulate when running SPICE?

One technique to speed up analog and AMS simulation speeds is using Real Number (RN) modeling, where the simulator uses an event-driven approach. When using RN modeling, first ask yourself if the desired behavior fits within the following limitations: