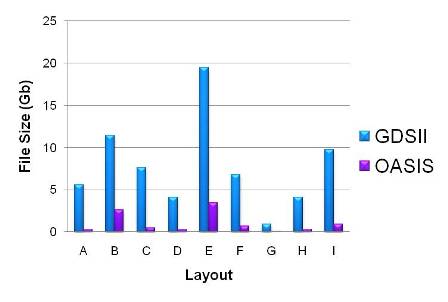 For an industry committed to constant innovation, changes in any part of the design flow are only slowly adopted, and only when absolutely necessary. Almost 10 years ago, it became clear that shrinking process technologies would bring a massive growth of layout and mask data—rougly 50% per node. This avalanche of data seriously challenges the two de facto standard file formats for layout data — GDSII and MEBES.

Results of experiments on real designs by Joseph Davis and team.

With surprising foresight, the industry came together and formed a working group to define a new format – the Open Artwork System Interchange Standard, or OASIS® (P39) and OASIS.MASK (P44). In 2005, when the OASIS format was officially approved, it was quickly supported by RET software from all of the major EDA vendors and some leading-edge companies such as Intel, TI, Fujitsu, NEC, and IBM had programs in place. OASIS looked primed for quick adoption.

My colleagues and I took an industry survey to find out how prevalent the OASIS format has become, and presented the results at European Mask and Lithography Conference in 2010. Figure 1 shows the results as a function of technology node at two points in the flow: handoff from RET to fracture, and the handoff of fractured data to the mask house. 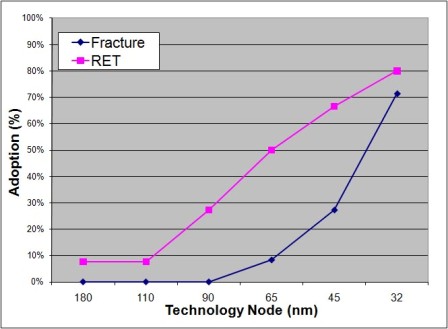 Figure 1: OASIS adoption by technology node, broken down by the data-prep hand-offs. The non-zero adoption rate in older technologies reflects the fact that some manufacturers came on-line with those technologies when OASIS was widely available and proven in the production flow.

As of 2010, foundries have widely adopted OASIS for the post-tapeout flow and report at least a 10x file compression improvement. However, for 45 nm designs in 2009 there was still very little use of OASIS as a stream-out format from design house to foundry, or from foundry to mask house. So, if OASIS isn’t in production for mask making – the application that was the impetus for its creation – and it isn’t the standard for tape-out to the foundries, is OASIS dead? Was the data explosion a mirage on the sand? Not at all.

The first thing that jumps out from this chart is that adoption of OASIS in the RET step led that of the fracture step by two whole technology nodes. Since the mask data is largest after fracture, many expected that the hand-off from fracture to mask making would have the fastest adoption. Why was the RET step, which deals with smaller files, the first place where OASIS was adopted?

Cost of inaction – The direct, measurable cost of storing and processing very large files. This direct cost has been flat because the cost of hard disk storage an internet bandwidth has been decreasing at almost exactly the same rate that storage needs have been increasing. However larger file take more time to process, load into viewing tools, review, transfer, etc. These effects are real, but difficult to measure directly. The RET and fracture steps have approximately the same cost of inaction.

Risk of inaction – Eventually, one of the layouts will actually exceed the capabilities of the legacy file formats and the chip will literally not be manufacturable. At each node, the foundry and mask houses can estimate the probability of this happening.

Benefits of migration – Lower file size, processing time, and engineering review time. For RET, the file size is reduced ~5-10x with OASIS. For the fracture step, the gain is less (2-4x), but using OASIS can also eliminate the need for multiple file formats for different mask writing and inspection machines.

Cost of migration – The upgrade cost plus the cost of qualifying the new format in the manufacturing flow. For RET, the upgrade cost is negligible, as RET and associated software are updated quarterly. Qualification can be achieved in parallel with the existing flow, so the over-head is small. However, the mask tools must be able to accept OASIS as input, which likely requires new hardware to be purchased at the cost of millions per machine
Risk of migration – The probability of data loss or corruption cannot be predicted, and can only be mitigated by a lengthy prove-out period.

Environmental factors – The technology development cycle. Early technology development requires test chips, which need masks. Therefore, mask hardware vendors must have their products ready very early in a technology. Mask houses won’t demand OASIS support until it has been production proven. The RET hand-off, on the other hand, is software-to-software, which is more easily updated than hardware. Therefore, the post RET hand-off is a natural place to test and prove the new format.

From the starting point of having full support in the EDA software, 18 months for proving in a technology node, and a two year model of technology development, it is natural that mask tools are just now starting to support OASIS, five years after it was fully supported by the EDA industry. This process of downstream migration will naturally continue, as the new format has proven to add value throughout the flow.

We anticipate a gradual expansion of the full adoption of OASIS. But there are benefits even for hybrid flows, in which both OASIS and legacy formats are used. Figure 2 shows the relative runtime for several different mask manufacturing flows, from the current state to a full OASIS deployment. 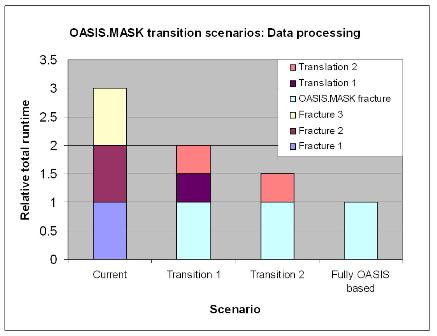 Figure 2: Data processing effort for mask manufacturing with increasing extent of machine support for OASIS.MASK. The basic assumption is that commonly three formatting steps are conducted (Fracture 1, Fracture 2, Fracture 3). OASIS.MASK introduction has the potential to reduce the overall effort by 3x.

In the design area, we expect OASIS to be used increasingly in the chip assembly/chip finishing stage, especially for large designs. This is the area where reducing file size can improve the over-all infrastructure burden and increase turn-around-time for such activities as physical verification, file merging, etc. In fact, the de facto standard custom design tool (Virtuoso) officially started OASIS support in February 2011. Other stages of the design process may benefit from other aspects of the OASIS format, such as encryption and the structure of the data storage format (indexes, etc), the value of these features will depend on the specific design flow and design types.

The OASIS formats offer at least 10x data volume reduction for the design and post-RET data and over 4x for fractured data. The new formats were quickly support by the EDA companies, and adoption of the new format in production flows is progressing – led by the post-RET data hand-off starting at the 65nm node – where more than half of those surveyed are using it.

The deployment of OASIS and OASIS.MASK has been strongly affected by both economic and technical factors. Yet even partial deployment, along with format translation, can offer a significant benefit in data processing time and file size reduction that will meet the post-tape out and mask making demands of designs at 22nm and below. With the continued increase in design complexity, OASIS deployment will continue to grow in both the manufacturing and design flows.

To learn more, download the full technical publication about this work: Deployment of OASIS.MASK (P44) as Direct Input for Mask Inspection of Advanced Photomasks.

0 Replies to “Dawn at the OASIS, Dusk for GDSII”