So what is going to happen with the technology? Oasys have synthesis, placement and floorplanning technology called RealTime Designer that works at the RTL level. It turns out that working at the RTL level instead of doing optimization at the gate-level as other synthesis tools do is extremely fast. 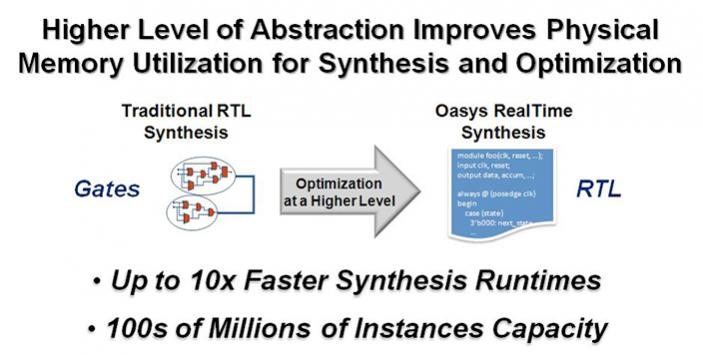 My prediction is that Mentor will graft the Oasys floorplan compiler onto Olympus and thus make it competitive with offerings from Synopsys, Cadence and Atoptech. Whether this is enough to make the product really successful remains to be seen. In EDA most of the profit goes to the #1 supplier (I think that is Synopsys at the moment) and some to the #2 (either Atop or Cadence, although I’ve heard lots of rumors about Cadence P&R not being competitive at the moment, these things go in waves). It is hard to make good money if you are #4 although since physical design sells for such a high price there may be more profit to be divided up.

Mentor also has a major ownership stake (probably a controlling interest) in Calypto who have sequential equivalence checking and sequential power reduction (which they developed themselves) and the Catapult high-level synthesis product (that Mentor put into Calypto when they did the deal). I expect they will also end up getting the Oasys synthesis technology to put under the hood of Catapult so that it goes all the way from C/C++ down to placed gates with accurate timing. One of the problems of high level synthesis is that the metrics used for quality of results are very coarse (two multipliers are bigger than one etc) making it hard for the tool to make good choices. With the very fast synthesis from Oasys added in, they should be able to make better decisions and thus produce better results. Oasys did some work with AutoESL before Xilinx acquired them and it looked promising (and it is an open secret that the synthesis engine in Xilinx’s Vivado is based on Oasys’s technology). Of course Calypto may also be a sales channel for RealTime Designer as a standalone synthesis tool.

So we will have to wait and see what actually happens. There are various rumors about Joe Costello trying to roll up several EDA companies into one and thus produce another “big” EDA company overnight but I don’t see this being anything like that. But Costello is the chairman of the board of Oasys, of course, so is involved at least that much.

Anyway, it looks like a good deal for Mentor: not much money, make their P&R competitive, give their HLS a competitive advantage and, perhaps, a new product line.