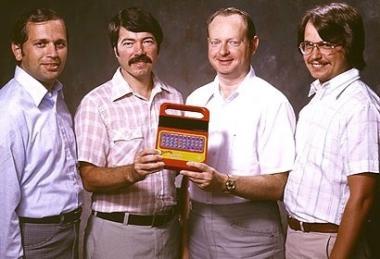 Success has many authors and the Speak & Spell product from Texas Instruments generated lots of write-ups to demonstrate this. For most of the semiconductor industry, results of innovation were not apparent to the masses but, for the consumer electronics that emerged in the 1970s, the innovations were visible, exciting and fun. My job in the Consumer Products Group (CPG) was Engineering Manager with responsibility for the design and development of all the chips and plastic cases used in TI’s fledgling consumer business. In early 1977, almost all of CPG was moved from Dallas to Lubbock. From then on, we performed the logic design for our chips in Lubbock while the physical layout was done in Houston under the direction of K. Bala, an energetic, driving manager who was perfect for the task of juggling dozens of complex designs while competing for resources with TI’s traditional semiconductor business. 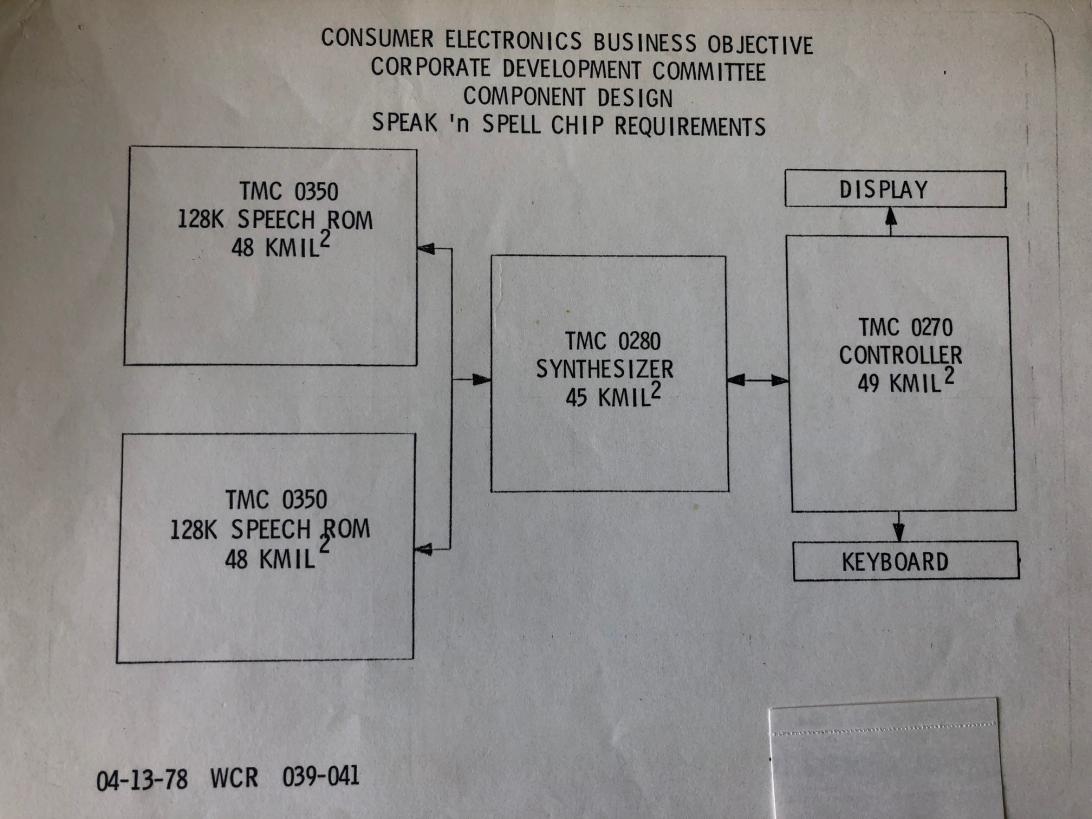 Paul Breedlove was in charge of product development for the “Consumer Calculator Division” which was managed by Jim Clardy (later CEO of Harris Semiconductor and then co-founder and CEO of Crystal Semiconductor (which ultimately became Cirrus Logic). Jim and Paul had a miserable job. Japanese manufacturers like Casio, Sharp, Toshiba and many more could design and manufacture great “four function” (add, subtract, multiply and divide) calculators for less than TI could. By late 1977, TI was reselling Toshiba four function calculators with a TI label because they were more profitable than our own. Paul kept searching for a differentiating alternative and he found it by attending one of the monthly “Research Reviews” that were held in the Central Research Laboratories (CRL) and open to TI employees from other parts of the company. At this particular review, Richard Wiggins presented the technology he was developing for speech synthesis. He was approaching a capability of producing understandable speech at a data rate of only 1000 bits per second. Paul was fascinated. Why not develop a product that took advantage of speech to differentiate, or augment, traditional consumer electronic products? Paul was helped along by the analogy of one of the few really profitable, successful consumer calculators called “The Little Professor” which was an arithmetic learning aid for children. Every year we expected revenue for the Little Professor to decline but it seemed to have a life of its own. We were beginning to realize that parents will pay any price to give their children an advantage in the education system.

As an experiment in innovation, TI had recently established a funding mechanism called the “Idea Program” where any employee could propose an idea for a product or technology and, if approved, receive $25,000 of funding to demonstrate feasibility. Paul submitted an Idea Program proposal (probably because the Consumer Calculator Department was really squeezed for funding) and Ralph Dosher, the CPG Controller, approved it. That’s when I became involved. Paul needed someone to figure out how to design chips that could be used in the product. Larry Brantingham worked in the Logic Design Branch of the Engineering Department I ran and he became the obvious choice.

Speech synthesis chips were under development at National Semiconductor and other companies but success was very limited because the current state of the art N-Channel MOS, or NMOS, technology was just too slow to achieve the needed performance for this computationally intense application. What is so remarkable about Speak ‘N Spell is that Larry didn’t use the higher performance NMOS technology but instead used the much slower P-Channel MOS, or PMOS. Why, you might ask? Very simple. Larry didn’t know how to design with NMOS. In addition, CPG was in a continuous battle with the Semiconductor Group over pricing of chips and Morris Chang, Semiconductor Group VP, became tired of all the arguments and settled the dispute by offering CPG a flat $25 price per two-inch wafer of PMOS, which was a five photomask process at that time. If Larry had learned how to design with NMOS, the program would have failed because the cost of NMOS wafers would have been too high. While the artificially subsidized price for PMOS made the cost feasible, the performance seemed much to slow.

Larry went to work with Richard Wiggins designing a pipelined multiplier in PMOS. Responsibility for the product was moved from Consumer Calculators to Specialty Products which was run by Kirk Pond (later CEO of Fairchild Semiconductor) because, although Consumer Calculators were struggling, the Specialty Products Divisions was struggling even more to find new product possibilities. Gene Frantz was enamored with the product and quickly became product manager, tasked with all the issues of choosing product features, name, marketing, etc. as well as managing the overall product development (Figure One)

Even more ridiculous than designing a pipelined multiplier for the synthesis chip was the task of designing read-only memory (ROM) chips big enough to store the pre-recorded speech vocabulary. When I presented the proposed chip design program to the TI Corporate Development Committee, Dean Toombs, head of R&D for the Semiconductor Group argued that the engineers in CPG had gone crazy. Semiconductor Group was struggling to produce the NMOS 2716 ROM at very low yields. If they couldn’t produce a 16K ROM, how could CPG design a 128K bit one? What Dean overlooked, however, was the fact that the TMS 2716 needed an access time of 450 nanoseconds while our speech chips could be dramatically slower. PMOS was also an older, more mature technology and was easier to produce than the highly advanced NMOS. So we received approval to go ahead and received corporate funding to develop a four-chip system with a synthesizer, controller and two 128K bit ROMs (Figure Two).

As the actual die size increased beyond the original estimates, the estimated cost of the chips increased. At one point, Kirk Pond threatened to kill the whole program because it was well known that $40 was a critical point for consumer products where both spouses had to approve the purchase. By the time Speak ‘N Spell was introduced, the suggested retail price was $60 and it sold so well that we quickly raised it to $65. Like the Little Professor, parents just couldn’t resist the purchase of an educational aid that would help their children spell, even though the synthesized speech sounded more like a robot than a human. Shortly after the introduction, we were invited to show the product on the Today Show, the most popular TV news program of the day. Charley Clough, our highly articulate and lovable head of Semiconductor Group sales walked Jane Pauley through the steps of using Speak ‘N Spell while Gene Frantz was behind stage with backup units since the reliability of our early production units wasn’t very good.

Speak & Spell took the world by storm and became a great story of corporate innovation. Not long after the introduction, I moved to Houston and took over the Microprocessor Division where we developed the TMS 320 single chip digital signal processor, or DSP. Although I was the only one who worked on both programs, there was at least a remote connection to the theme of digital signal processing in TI’s speech synthesis success. And DSP became the cornerstone of TI’s next wave of growth.