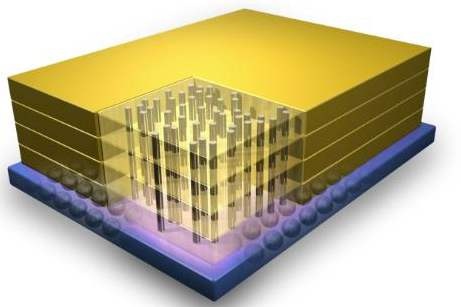 Perhaps no semiconductor company took it on the chin harder the last half of 2011 than Micron. And yet, perhaps no company was racing as hard as Micron to make a radical changeover. Micron is considered a bell weather on the overall health of the semiconductor industry given that DRAM, NAND and NOR Flash are used in some combination in every piece of electronic equipment. But sometimes economics and geopolitics come to the fore and, watch out, the DRAM market tanks. For Micron, the Future is not standard commodity DRAM, it is High Performance Servers and NAND Storage. Both have processor vendors as partners and some interesting innovation on the horizon. 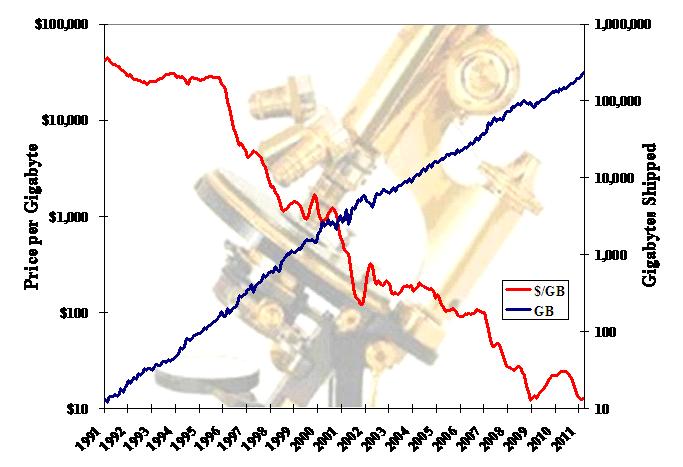 Jim Handy, the storage and semiconductor analyst, wrote an article in Forbes this past week that made me stop for a second and think about the difference we see in DRAM economics vs. the traditional kind taught in college and MBA classes. The traditional one says that markets seek a balance between supply and demand and that price is the arbitrator. If supply overshoots, then a lower price results and demand picks up to restore the balance. In Jim Handy’sarticle, he includes a chart (see to the left – source:Forbes) that shows over the last 20 years DRAM demand has been constant despite gyrations in pricing. Therefore, if prices drop dramatically there is not a significant uptick in demand. Meaning this doesn’t adhere to normal economic theory. Micron, Samsung, Elpida and Hynix would be much better off forming a cartel and agreeing to only build capacity at less than the 50% bit yearly growth rate that has been observed over time.

The alternative to the cartel, that won’t happen, is to move to other greener pastures. NAND Flash has the high growth rate of Smartphones, Tablets and now ultrabook PCs behind them and in the near term should provide some shelter but Micron will need to forge partnerships with processor vendors to develop higher performance links between the CPU and Memory in order to create value at the expense of trailing edge DRAM. DRAM growth in the Apple ecosystem is not happening in Smartphones and Tablets: it’s one chip (the lowest density) and done.

The most interesting initiative that Micron has on the table is the joint venture with IBM to develop what they call the Hybrid Memory Cube. Essentially it is a 3D structure of stacked memory chips connected in parallel to a memory controller or processor that is at the base of the substrate using Through Hole Silicon Vias (TSVs). The technology offers space savings but the most important aspect is increasing the bandwidth between processors and memory. Micron claims that bandwidth on today’s prototype is 128GB/s or a 10X improvement over DDR3.

Over the past ten years as the Data Center build out has increased, operating power and cooling has grown generation to generation to the concern of many. The culprits are the processor and DRAM. Ten years ago it was mostly from the processor. Now it is evenly split between the two as the DRAM footprint has grown and the processor to memory performance gap has widened. Some of the footprint growth is due to VMWare and virtualization.

Intel has been able to capitalize on the growing DRAM power trend by recommending that data centers use the highest performing, highest price processor, which happens to have the largest on chip cache. These large caches allow more of the workload to stay on chip and be performed at a lower power budget (fewer clock cycles) than going off-chip to DRAM. If Micron were able to close the performance gap significantly then some of the value of the server would migrate away from the processor to DRAM. However, the processor vendors will likely take the step of packaging it all together and offering it as a combined solution and thus retain control of the server platform pricing. This is where Intel, AMD, nVidia and IBM are surely headed. Whoever gets there first has an obvious advantage.

The 3D Hybrid Memory Cube is due to be in production second half of 2013. Micron’s biggest challenge will be to build a business model around it with processor and data center partners that allow it to escape the dreadful economics of standard DRAM and capture the value add of a much higher performance/watt metric that Intel has put in place with its Xeon server processors. I can see Intel expanding its current relationship with Micron, which is based on a joint manufacturing agreement on NAND to include 3D DRAM, in order to maximize its control and pricing of the servers targeting data centers.

Full Disclosure: I am long AAPL, INTC and ALTR

One Reply to “Micron Races to Its Future”