The weather in Taiwan last week was very strange. It was so cold I tried to turn on the heat in my hotel room only to find out it was not possible. If you want more heat they bring a portable heater because who needs central heat in Hsinchu? Even stranger is all of the media hyperbole on the next process nodes:

Apple’s Implications for Semiconductor
by Robert Maire on 01-29-2015 at 11:00 am
View Profile
View Forum Posts

Apple’s iPhone 6 alone represents at least 50K wafer starts/month plus the iPad (A8X). What could the Iphone 6S/7 & A9 mean? What about the iWatch? Apple is the technology and volume driver of the semiconductor industry so lets take a look at the broader implications.

Last August I presented possible scenarios for the manufacturing of the Apple A9 processor. Quite a bit has changed since then so I think it is worth revisiting. There has also been quite a lot of misinformation in the press which is now pretty much a daily thing. Attending the IEDM conference last month really was a stark difference… Read More

As you may have read, the CEO of Ultratech made some unfortunate statements on the recent quarterly conference call in regards to FinFET Yield. As a result there has been a lot of speculation about the who, what, and why. I blogged about it because it interested me personally plus I wanted to collect more data on the subject. Some of … Read More 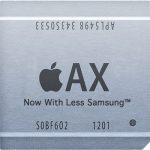 There still seems to be a lot of confusion here so let me set the record straight. In regards to the Apple Ax SoC, the Apple iPhone 5s will have Samsung 28nm Silicon. Samsung 28nm is still ramping but Samsung can make enough wafers and eat the yield issues no problem. The Apple iPhone 6 in 2014 will have TSMC 20nm as I reported previously.… Read More 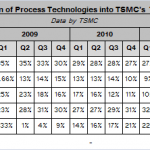 As I write this I sit heavyhearted in the EVA executive lounge returning from my 69[SUP]th[/SUP] trip to Taiwan. I go every month or so, you do the math. This trip was very disappointing as I can now confirm that just about everything you have read about TSMC 28nm yield is absolutely MANURE!… Read More