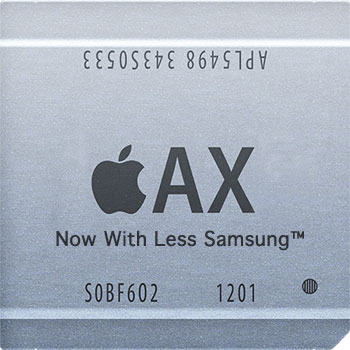 There still seems to be a lot of confusion here so let me set the record straight. In regards to the Apple Ax SoC, the Apple iPhone 5s will have Samsung 28nm Silicon. Samsung 28nm is still ramping but Samsung can make enough wafers and eat the yield issues no problem. The Apple iPhone 6 in 2014 will have TSMC 20nm as I reported previously. TSMC 20nm is ahead of schedule so no problem there. Contrary to what was reported (TSMC reaches deal with Apple to supply 20nm, 16nm and 10nm chips, sources claim), the iPhone 6s in 2015 will have Samsung 14nm Silicon. Samsung is a bit ahead of the pack on FinFETs and from what I was told they made a wafer price offer that Apple could not refuse. As I mentioned before, there will be a glut of 16/14nm wafers so pricing will be VERY attractive for the fabless semiconductor industry. Best of luck to all who oppose us fabless people, you will need it.

This is all fact. Moving forward is opinion but I have a much better record on being right than my counterparts in regards to the fabless semiconductor ecosystem so keep on reading:

It is being reported that Apple will invest in a fab: Exclusive: Apple has a fab, will make their own chips. This is a complete FABrication. The SemiAccurate website has not even been semi accurate in regards to the foundry business. They have also changed business models so now you have to pay $1,000 to be a member of a rumor website? Good luck with that. I met the site’s owner Charlie Demerjian at CES in Las Vegas two years ago. Lets just say that he may talk tough behind a keyboard but in person, not so much. Charlie was wrong about Apple manufacturing at Intel, he was wrong about TSMC 40nm and TSMC 28nm, and he is wrong here. No way is Apple going to buy into a fab, especially UMC. UMC is a second source foundry which means they are a year or two behind TSMC. The whole point to the fabless ecosystem is competition, the ability to choose wafer providers based on different business variables. No way can Apple/UMC compete with Intel, TSMC, and Samsung on technology and wafer costs. 450mm wafers are coming and Apple will try and compete with a 300mm fab investment?

An article from C/NET has Apple tying up with GLOBALFOUDNRIES:

Apple talking to Globalfoundries about U.S.-based chipmaking, says report. If Apple owned capacity at a fab, it would give the company the kind of control over both design and chip manufacturing that Intel has.

This is not true. Apple started with Samsung as an ASIC customer and has worked for 5+ years to get out from under Samsung and be able to independently participate in the fabless semiconductor ecosystem. Apple does all of their own design work now. Apple even develops foundation semiconductor IP. Apple has successfully moved production from Samsung 28nm to TSMC 20nm. Samsung 28nm is gate-first HKMG technology and TSMC 20nm is gate-last HKMG with double patterning so that change was no small feat. Do a search on LinkedIn for Apple employees under the semiconductor category. You will see hundreds of experienced semiconductor professionals at Apple. You will also see a group of former ATI employees who have recently joined Apple for custom GPU development. Yes, Apple is designing their own GPU.

Bottom line: No way will Apple tie up to one foundry and give up the competitive advantages of the fabless semiconductor ecosystem. Not going to happen. There is a reason why we are all fabless now and I do not see Intel or anyone else turning back time to the Jurassic semiconductor period where “real men have fabs” weighing down their balance sheets, just my opinion of course.

0 Replies to “Where will Apple Manufacture the next iPhone Brain?”