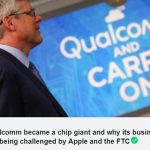 Over the holidays I did an interview with CNBC on the subject of Qualcomm. The producer had read the History of Qualcomm chapter in our book Mobile Unleashed and wanted to base a 15 minute report on it. The interview lasted 90 minutes but of course only snippets of what I said were used. You can see the recorded report by clicking on the… Read More

This is a Different GLOBALFOUNDRIES!
by Daniel Nenni on 09-22-2017 at 7:00 am
View Profile
View Forum Posts

Having followed GF since its inception, I agree with CTO Gary Patton, what we are seeing today truly is a different GLOBALFOUNDRIES! Our first GF blog was published on 9/13/2009 and we have done a total of 173 GF related blogs that have collected more than 1.5M views thus far. 72 of those blogs were written by me so I have followed this… Read More

The media already has Apple and Intel in talks to make the A11 SoC in 2018 as a result of the recent Intel/ARM IP licensing deal. This is probably one of the funnier media bumbles I have read in a while so let’s talk about it in a little more detail.

“According to Nikkei Asian Review, Intel is now perfectly poised to give TSMC a good run for… Read More

In 2015 Qualcomm stunned the fabless semiconductor world with an unprecedented layoff. When I first heard about it the number was 5% but it kept growing and finally hit 15%. The big misstep here was, that after being the SoC leader starting in 2007 with the Snapdragon series of chips that powered the Smartphone revolution, QCOM did… Read More

Qualcomm Rounds Out IoT Offerings
by Patrick Moorhead on 03-22-2016 at 7:00 am
View Profile
View Forum Posts

Lots of chip companies like ARM Holdings, Intel, NVIDIA and Qualcomm are spending time and effort to find a place for themselves in the IoT market because they, like I, believe in a gigantic, future market. Some companies are focusing on wearables and drones while others are looking to automotive and smart home. Qualcomm previously… Read More