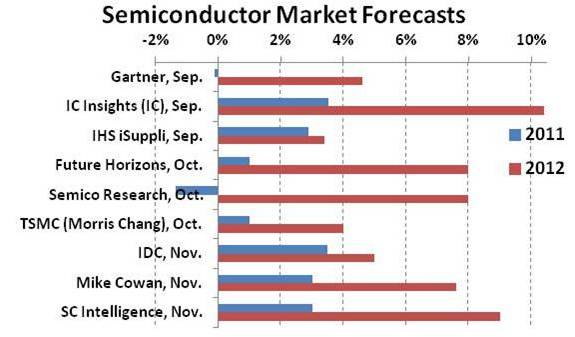 The outlook for the global semiconductor market in 2011 has deteriorated from earlier in the year due to multiple factors including slower than expected economic growth in the U.S., debt crises in Europe and the Japan earthquake and tsunami. Recent forecasts have narrowed down to a range of -1.4% to 3.5%. In the first half of 2011, forecasts ranged from 5% to 10%. 2012 growth is expected to improve over 2011, with a range of 3.4% to 10.4%.

WSTS has released data on the semiconductor market through 3Q 2011. Thus year 2011 growth will be determined by growth in 4Q 2011. The mid-points of key company guidance for 4Q 2011 revenue growth vary widely. Microprocessor companies Intel and AMD expect growth of about 3%. Qualcomm’s mid point is 10%. Texas Instruments and STMicroelectronics, which are largely analog, expect declines of 2% and 9%, respectively. The major Japanese semiconductor companies are continuing to bounce back from the March earthquake and tsunami. 3Q11 revenue growth over 2Q11 (in yen) was 21% for Toshiba’s semiconductor business and 17% for Renesas Electronics. Based on revenue forecasts for the fiscal year ending March 2012 and assuming the same growth rates for 4Q11 and 1Q12, Toshiba’s 4Q11 semiconductor revenue growth is estimated at 24% and Renesas is estimated at 4%.

We at Semiconductor Intelligence have developed three scenarios for 4Q11 and year 2011 semiconductor revenue growth which we believe encompass the likely alternatives. As shown in the table below, the lowest case is no growth in 4Q11, leading to 2.3% annual growth. The middle case results in 3% growth in 2011 and the high case results in 3.5% growth. Our official forecast is 3% growth in 2011 and 9% in 2012, one percentage point lower in each year from our August forecast. 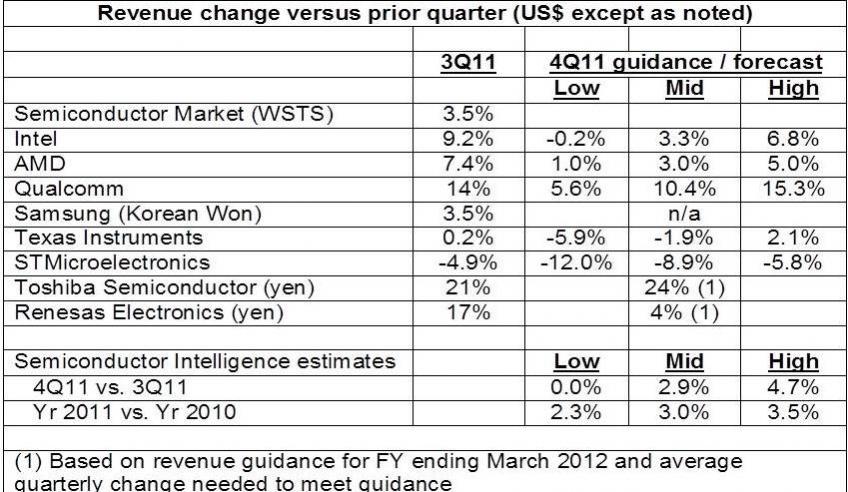 Why are our forecasts for 2011 and 2012 semiconductor market growth at the high end compared to other forecasters? The answer is demand for electronics remains healthy despite global economic problems. The chart below shows worldwide unit shipment change versus a year ago based on data from IDCand Strategy Analytics. Mobile phone growth has moderated to 11% to 12% growth in 2Q11 and 3Q11 after a strong recovery from the recession. PC growth has slowed significantly, with a decline in 1Q11 and growth in the 3% to 4% range for the last two quarters. Some of the slowdown in PC growth can be attributed to the rapid rise of media tablets, such as the Apple iPad. For many users, a media tablet is a replacement for a PC. Adding media tablet units and PC units results in higher growth for the combination, in the 14% to 17% range for the last two quarters. Thus growth in mobile phones and in PCs + media tablets has been double digit in 2Q11 and 3Q11, similar to growth rates in the first halfof 2008 prior to the global financial crisis. 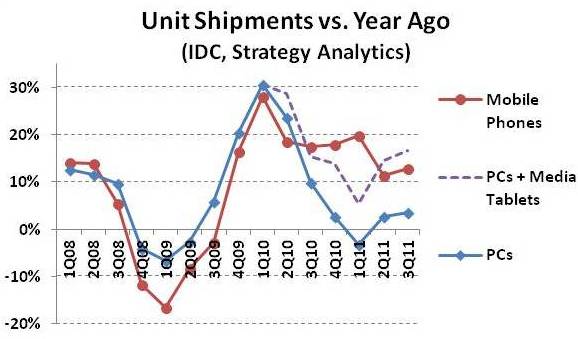 Semiconductor Intelligence, LLC can perform a variety of services to provide you and your company with the intelligence needed to compete in the highly volatile environments of the semiconductor and electronics markets.