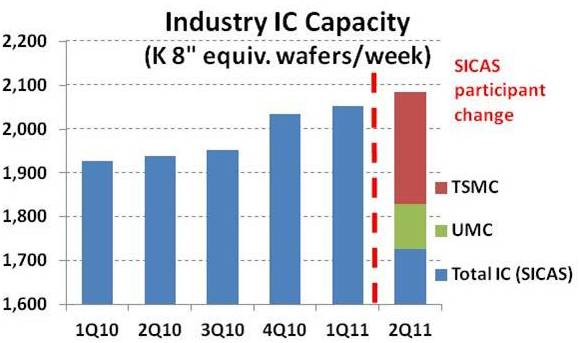 SICAS (Semiconductor Industry Capacity Statistics) has released its 2Q 2011 data with significant changes in membership. The data is available through the SIA at: SICASdata The SICAS membership list no longer includes the Taiwanese companies Nanya Technology, Taiwan Semiconductor Manufacturing Company Ltd. (TSMC) or United Microelectronics Corporation (UMC). These companies had been in previous SICAS data for several years. Nanya is a relatively small semiconductor manufacturer with revenue of $1.8 billion in 2010. TSMC and UMC are the two largest semiconductor foundries, with 2010 revenues of $13.3 billion and $4.0 billion, respectively. IC Insights, which includes foundries in its rankings of semiconductor suppliers, listed TSMC as the third largest semiconductor supplier in both 2010 and 1[SUP]st[/SUP] half 2011. UMC was 19[SUP]th[/SUP] in both rankings. ICInsights Rankings

The only other change in SICAS participants is the omission of National Semiconductor. The National data may be included with Texas Instruments, which acquired National effective September 27, or may have been neglected during the transition. National’s revenue for its fiscal year ended May 2011 was $1.5 billion.

We at Semiconductor Intelligence estimate TSMC and UMC represented about 16% of total IC capacity in SICAS. Thus losing these companies has caused a major disruption in SICAS data and makes comparison ofthe 2Q 2011 data with previous quarters invalid in most categories. However TSMC and UMC release information on wafer capacity and shipments in their quarterly financial releases. Thus adding the reported TSMC and UMC 2Q 2011 data to the SICAS data results in total IC data which is more comparable to prior quarters.

The chart below shows SICAS data for total IC capacity in thousands of eight-inch equivalent wafers per week. Capacity for TSMC and UMC was added to the SICAS 2Q 2011 capacity for comparison with prior quarters. 2Q 2011 IC capacity (including TSMC and UMC) was 2,084 thousand wafers, up 1.6% from 2,052 thousand in 1Q 2011 and the fifth consecutive quarterly increase. IC capacity in 2Q 2011 was still 6% below the record capacity of 2,223 thousand wafers in 3Q 2008. The adjusted 2Q 2011 data is still not entirely comparable to prior SICAS data since Nanya (and possibly National) are no longer participating.

The March 11, 2011 Japanese earthquake and tsunami also had some impact on capacity. The disaster affected several wafer fabs either through direct damage or through power outages. Since SICAS data is based on average capacity throughout a quarter, the impact on 1Q 2011 SICAS data was not likely significant. Most of the affected fabs were back to full production by the end of April. Almost all of the fabs were back up by mid July. Although the size of the impact is difficult to estimate, 2Q 2011 capacity and utilization would have been somewhat higher if not for the Japan disasters.

SICAS reported total IC capacity utilization of 92.2% in 2Q 2011, down 2.0 percentage points from 94.2% in 1Q 2011. The change in participants makes the 2Q 2011 SICAS data not directly comparable to 1Q 2001. Adding capacity and shipment data for TSMC and UMC in 2Q 2011 enables a more apples-to-apples comparison. In this second case, total IC capacity utilization was 92.8% in 2Q 2011, down 1.4 points from 1Q 2011. Another way to make a more equivalent comparison is to use SICAS data for MOS IC capacity without foundry wafers. This category was not as affected by the participant changes since TSMC and UMC reported in the foundry category. Utilization for MOS ICs without foundry was 92.4% in 2Q 2011, down 1.2 points from 93.6% in 1Q 2011. 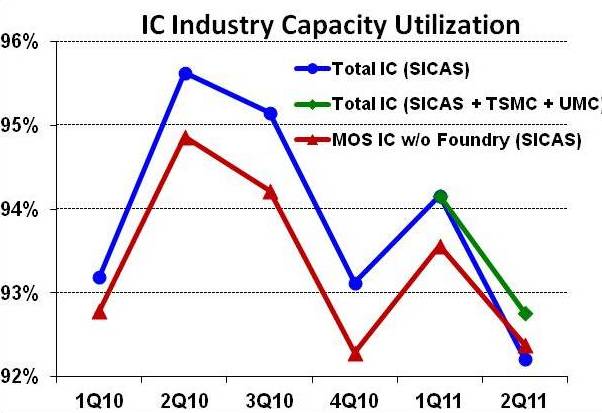 The change in participants in SICAS is disappointing. SICAS has enjoyed fairly high participation rates since it was formed in 1995. As a member of the SICAS founding executive committee I remember the spirit of cooperation as foundry companies and integrated device manufacturers were willing to share data for the first time, with the goal of providing useful information for the entire semiconductor industry.