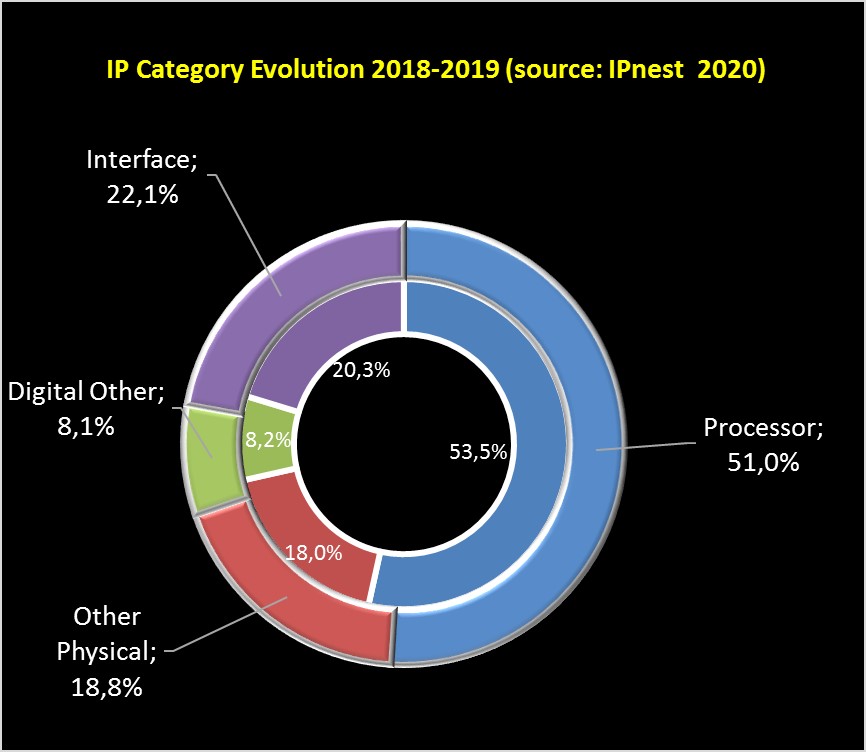 Good news is good to hear, particularly these days! The behavior of the Design IP market in 2019 is extremely positive, when the semiconductor market has seen a decline worst than in 2009 (economy crisis) or 2001 (internet bubble collapse). Analysis this 5.2% growth in detail will help to understand the future of the IP market, as we think this market exit a decade based on smartphone explosion fueling the IP growth, to enter in the 2020 decade we expect to be data centric. But let’s have a look at the main trends shaking the Design IP in 2019. 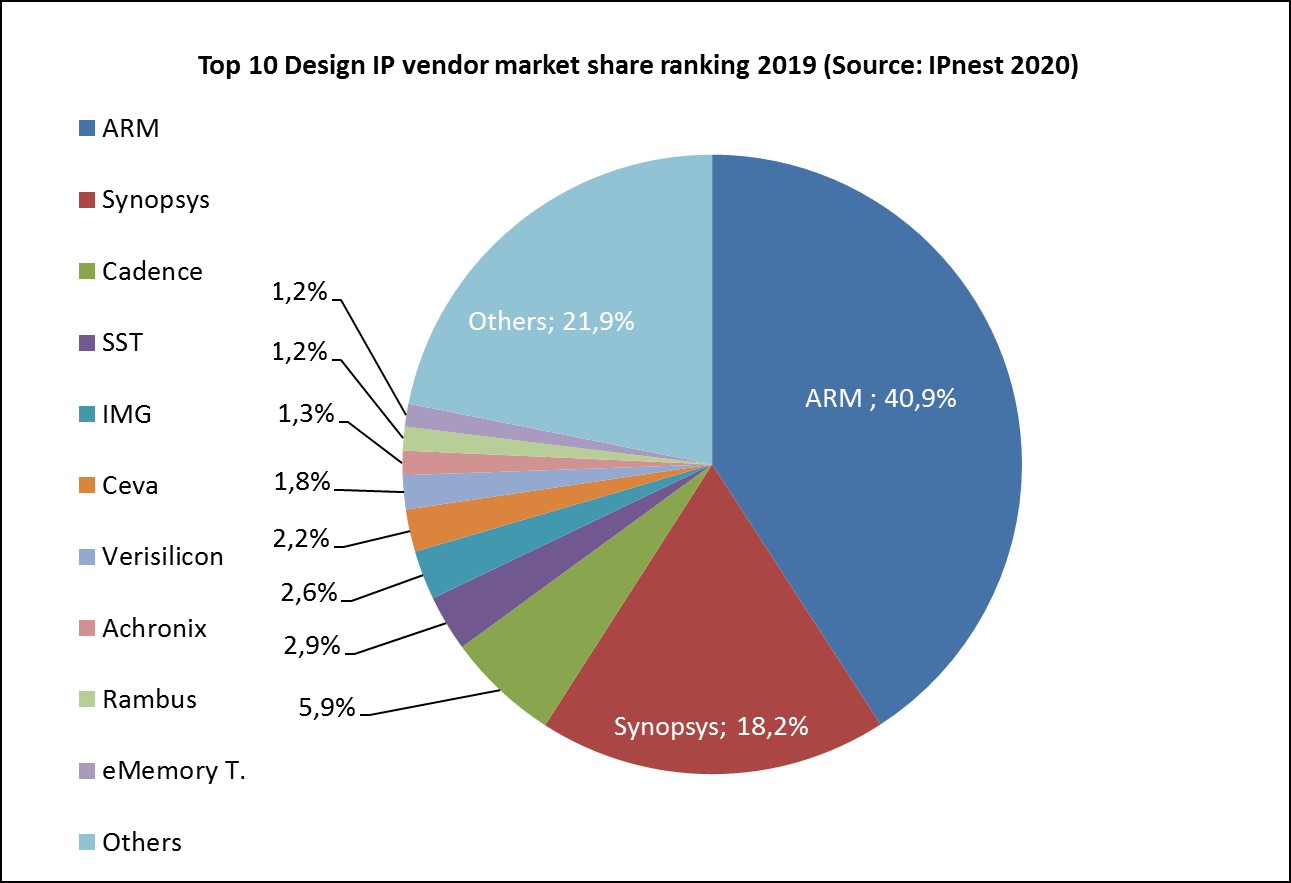 ARM is still a solid #1, with more than 40% market share… but ARM is staying flat year over year. If we dig, we find that ARM license revenues have grown by 13.8% when royalty revenues have declined by 6%. ARM assign this lose in royalty to the smartphone volume decline and it make sense, considering ARM penetration in CPU and GPU IP in wireless phone.

The question that you may ask is about the impact of RISC-V on ARM revenues. The answer is that RISC-V adoption has certainly grown in 2019, but that it’s too early to measure the precise impact. This should clarify, but it will probably take a couple of years before we can measure the RISC-V penetration in term of revenues flow. Clearly the change on CPU IP business model is on-going, and customers are happy to support this evolution!

Now, let’s have a look at the various IP vendors who have been successful, as well as IP categories growing share of the IP market.

Synopsys and Cadence, respectively #2 and #3, are growing respectively by 13.8% and 22.9%. Synopsys highest growth come from the Interface IP category (19.3%), the other categories also contributing, but less, when Cadence growth is shared between Interface IP (thanks to Nusemi acquisition, but not only) and DSP IP (Tensilica).

Both EDA vendors are positioned as “one-stop-shop” IP suppliers, both have created their IP offer by running the acquisition of small to mid size vendors leaders on their segment. Synopsys has started in the early 2000’s when Cadence positioning in IP has started with Denali acquisition in 2010.

This growth rate is the clear signal showing that their IP long term strategy is successful. Being a “one-stop-shop” supplier strategy has been made possible because both were large enough companies with deep pocket allowing the multiple acquisitions to make to support this positioning.

We will see that the other winners in the IP market are, at the opposite, companies being extremely focused and able to be technical leaders on their segment or sub-segment.

The remaining two groups are “Other Physical”, aggregating various categories, “SRAM memory compiler”, “other memory compiler”, “physical library”, “Analog & Mixed-Signal” and “Wireless Interface” and the last group is “Other Digital”. Both groups are relatively stable, which means that they have grown at the same rate that the rest of the IP market, a bit more with “other physical” moving from 18% to 18.8%.

The interface IP market is the big winner in term of growth and market share, weighting $870 million in 2019. It’s not a surprise for IPnest, who will deliver the 12th version of the “Interface IP Survey & Forecast” in June 2020!

If we think in term of application or market segment, the evolution of interface IP is illustrating the move from wireless phone to data centric. In 2010, a large part of interface IP business was generated by smartphone SoC integrating protocols like USB, memory controller, HDMI, DP, SATA and MIPI, but no PCIe or Ethernet.

In 2019, we think the data-centric applications represent the largest share of interface IP business. Data-centric like data center, server, wired networking and 4G/5G base stations. In all these applications you can find advanced memory controller (DDR4, HBM2, GDDR6), PCIe and Ethernet requiring high-speed SerDes (up to 56G if not 112G) and emerging die-to-die (D2D) solutions.

Smartphones will obviously continue to integrate USB, HDMI or LPDDRx memory controller, but we expect the growth of IP market to be generated by data centric application during the 2020 decade.

If we need an example to illustrate this trend, let’s take the GPU IP usage in smartphone. The two market leaders, Samsung and Apple, have changed from GPU IP supplier (ARM or IMG) to a non-IP vendor. Apple has decided to develop GPU internally and Samsung has closed a deal with AMD to use their GPU.

On the other hand, IPnest think about creating a new sub-category in the Interface IP, to be specific related to Die-to-Die (D2D) interconnects. D2D protocols are in discussion, it can be based on massive parallel interface or high-speed SerDes (40G to 112G) and chips are already in production from AMD or Intel. We can expect D2D adoption to generate good business in the mid-term as chiplet can be a good work around for Moore’s law limitation…

To come back to the IP market successful companies, as already mentioned, they can be ranked in two groups. Large EDA companies offering a one-stop-shop IP portfolio, Cadence and Synopsys, and very focused vendors, leader on one (or very few) product.

– Silicon Creations, leader of the Analog Mixed-Signal (AMS) category in 2019 and 2018, the company being about ten years old and now #1 before Synopsys.

– Alphawave has been created in 2017 by a serial entrepreneur, Tony Pialis, being part of the Snowbush starting team, creating Vsemiconductor, acquired by Intel. Alphawave now enjoy $25 million revenues in 2019, based on advanced SerDes, after just two years !

– SST offering NVM IP, undisputed leader of the category, with revenues passing $100 million or more than two times the #2 revenues.

What is the secret for these IP vendors? Quality of the design (and product) is certainly the #1, being able to offer an innovative and advanced solution come right after. I should come back on these success stories, as each of them is like a novel, you want to turn the page!

To buy this report, or just discuss about IP, contact Eric Esteve
(eric.esteve@ip-nest.com)

Chiplet: Are You Ready For Next Semiconductor Revolution?