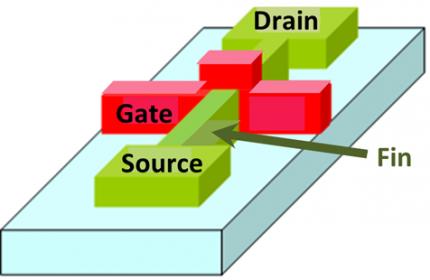 The first mention of FinFETs appeared on SemiWiki after the ISSCC conference in 2011. Dr. Jack Sun, TSMC Vice President of R&D and Chief Technology Officer, spoke about the power crisis the semiconductor industry is facing and FinFETs was one of the promising technologies that could help us. Since then, we have posted 100+ related articles with FinFET being the top trending term for search engine traffic coming to SemiWiki in 2012. That is why Dr Chenming Hu, the father of FinFETs, is the covetedKaufman Award winner this year and why I agreed to keynote FinFET day at the EDPS Conference in Monterey this month. They should call them FunFETs because we are certainly having a good time!

Recently I was invited to an informal back yard BBQ with a group of layout people who are working on FinFET test chips. Layout people are a different breed for sure but you will not meet a harder working group in the semiconductor ecosystem, believe it. And FinFETs are not making their life any easier!

My mother was very analytical, a natural born engineer. Unfortunately, in the 1950’s women weren’t encouraged to work outside the home much less become engineers but she did anyway and ended up being a draftsperson working on the Apollo Space program. I remember getting the VIP treatment as a kid at her work place and noticing that the clear majority of her coworkers were women, except management of course.

It was deja vu all over again when I worked with layout groups in Silicon Valley in the early 1980’s. Mostly women, none of which had engineering degrees but, like my dear mother, were engineers at heart and very good at what they did. 30 years later quite a bit has changed with layout groups and tools given that the job is much more difficult with all of the design and manufacturing advances we have seen over the years.

One of the things that has NOT changed however is the Design Rule Manuals (DRMs). They are still the center of the layout universe, they are still in paper or PDF form, and they are a growing problem for layout people. Process technologies are coming at them faster every year. Design rules are much more complicated and change more frequently during the “maturing” period. DRMs are much more cryptic and tape out schedules are staying the same. Clearly DRMs are going to have to change if we are going to continue down this path otherwise schedules will slip, mistakes will be made, layout people will spontaneously combust, not a pretty picture believe me. Adding layout head count will not help either since it takes years to master leading edge layout. In fact that is what has saved us thus far, the depth of experience the average layout person has today.

The change that is coming, the change that has to come, is with the DRMs. As a communication tool between the foundries and the fabless semiconductor companies it is failing. We need to provide the information REQUIRED to efficiently and effectively layout modern semiconductor devices. What we need is an Interactive Design Rule Manual that brings design rules to life! Sound reasonable?