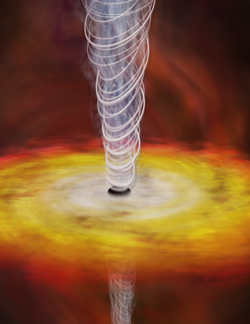 Ever since the announcement in early July from CERN that they likely have, probably, finally found the Higgs boson, I’ve been thinking about what quantum mechanics means to our daily ‘classical model’ existence. On the surface, nothing. The most fantastical aspects of quantum mechanics, like uncertainty, tunneling and the like, vanish from our perspective just as leaves on a tree appear as a homogenous green halo from a distance.

I asked a colleague at Mentor Graphics, physics PhD Dan Blanks, to help me make sense of the importance of the CERN announcement. He pointed out that indeed, even Higgs himself has no idea what his boson could be good for (aside from a Nobel Prize. Cha-ching!). But, he said, “without a Higgs field imparting mass to particles, matter would never clump together to form stars, planets, galaxies, semiconductors, and us.”

Peter Higgs proposed his boson as mechanism of the Standard Model in 1964 to explain how things acquire mass. Here’s my analogy: You are at DAC. The mobile bar rolls onto the show floor at 4pm. The once uniform crowd now starts accumulating near the bartender. As he moves, he attracts more people, which gives him greater mass and therefore more momentum. The thirsty conference-goers are the Higgs field, a background field that becomes locally distorted whenever a particle (bar) moves through it. The distortion generates the bar’s (particle’s) mass. The Higgs boson is a clustering in the Higgs field, like a wave of clusters of people gathering to spread the word as the refreshments come in. Okay, roughly.

But why are the CERN scientists so sure they found the Higgs (or a Higgs-ish) boson? Because they calculated that they meet “5-sigma” of statistical significance. Yes, we know that means they are pretty certain. But, actually, what does it mean in this context? An informative article in the Wall Street Journal explains. If you recall statistics, 5-sigma means a one-in-3.5-million probability. In this case, it means a one in 3.5 million chance that “an experiment just like the one announced this week would nevertheless come up with a result appearing to confirm it does exist.” In other words, a false positive. And, the same conclusion was reached by two independent CERN teams. They are so sure that they invited Peter Higgs himself to the announcement.

Even the most famous living physicist, Stephen Hawking, is confident enough in the finding that he paid up on a $100 bet. Hawking bet Gordon Kane (University of Michigan) that the Higgs boson did not exist. Kane came to believe Hawking was right and paid up years ago. Hawking was big enough to refund that money when the tables turned. On a side note, after seeing Hawking and physicist Kip Thorne recently, I was wondering why Moore’s law doesn’t ultimately lead to a black hole. Follow me: double the number of transistors, shrink the chip size, increase the density. Eventually, shouldn’t it become so dense that it will collapse in on itself? If so, that would be a small black hole that Hawking postulates would give off enough energy to supply all our power needs for all eternity. Yep, I smell a Nobel Prize…