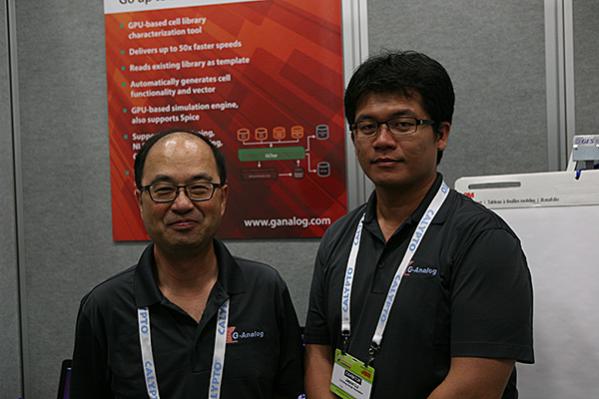 Jeff Tuanis the CEO and President of an EDA startup called G-Analog, founded in May 2012. His background includes working at: Cadence, Epic, Synopsys, Nassda, Chartered Semi and GLOBALFOUNDRIES. Jason Lu is the R&D manager. We met at DAC last week to talk about his company’s new product called Gchar for IC library characterization using a GPU-based SPICE circuit simulator.

– GChar : all the simulation data stays on the GPU, not the CPU, for maximum efficiency. Simultaneously simulate 10,000 of simulations.
– NVidia card, from 1 t 4 cards.

COncurrent simulation – many circuits at the same time (SIngle Instruction, Multiple Data – SIMD). An inverter or nand gate are examples of concurrent topologies

GChar looks at your GPU and CPU, then sends your netlist to each one.

Results – comparisons versus Open Source NGSPICE, and Gsim is within .41%. Gsim is not sold as a general purpose SPICE simulator.

FinFET simulation – BSIM CMG model in Verilog A? Convert into a C model, then support that soon.

Use both multiprocess and multithreading. recommended configurations.
GTS680 has 2G RAM and 1536 cores
GTX Titan has 6GB of RAM and 2688 cores

Gchar – batch oriented tool, not a GUI or interactive tool. Can be restarted.

OCV Benchmark
– with 47 cells, simulated in Fast mode: 20.13 minutes with a single GTX680 GPU. With Titan it is 8X faster. 23,000 Monte Carlo simulations. From Monte Carlo can calculate the OCV values.

Summary
The last GPU-based company to offer a SPICE tool was Nassda and they have gone away, so let’s see what G-Analog can do in the IC library characterization marketplace.