EDA CEO panels are usually rather dull but this one definitely held my interest. It was standing room only and I was surrounded by familiar faces from not only EDA and IP company executives, but also representatives from the top semiconductor companies around the world! The theme of course was collaboration, promoting the GFI “IDM-Like” business model for the merchant foundry business, but there were some surprises. 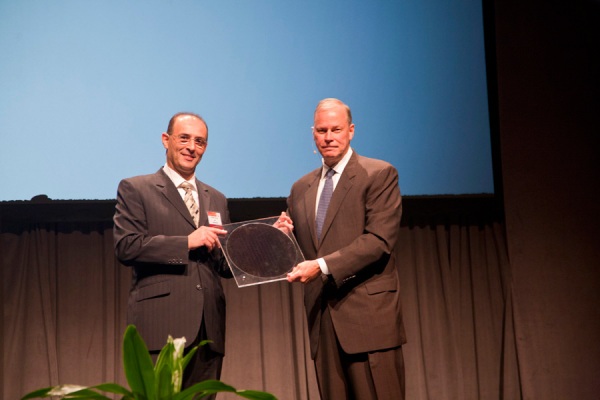 Doug Grose, GFI CEO, is an engaging speaker and has quite an impressive resume, with 25 years at IBM before joining AMD as senior vice president of technology development, manufacturing and supply chain. While I have not met Doug Grose yet (hint), the people who I know that have, confirm my first impression, that his leadership and technical skills are well suited to the competitive challenges GFI faces.

“AMD has put a number of the long-held assumptions about how to gain efficiency to question, and we’ve found some very interesting ways to approach the problem,” said Dr. Grose. “AMD is looking for ways to cut waste and drive value to our customers-it’s an approach based on Lean fundamentals.”

After the introduction by Doug Grose, Mojy Chian, GFI senior vice president of design enablement, was the first speaker. I know Mojy from Conexant years ago and the spin-out Mindspeed Technologies. I also worked with Mojy and his team at Altera. If you want to know how to yield at TSMC 40nm, talk to Mojy and his Altera design enablement team! Mojy credited the Chartered Semi foundry and AMD integrated device manufacturing experience for GFI’s vision of a new type of collaboration between partners and customers. 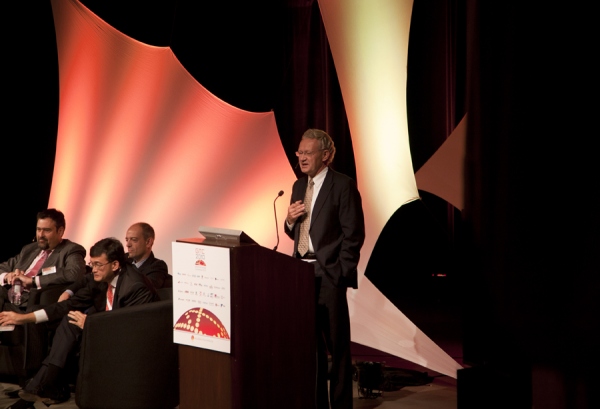 Synopsys CEO Aart DeGeus was the speaker that blew me away. Aart’s presentation compliments my blog Mobile 2Drive Semi 4Ever! Aart definitely gets social media, the mobile internet revolution, and how it will shape the semiconductor industry for years to come. I would also guess that Aart, like me, has teenage kids and a vegan mother in-law that he avoids. Aart correctly stated that social media IS collaboration and that we are raising a new generation of collaborators, so we had better be prepared to enable them, unlike my computer science undergraduate experience where collaboration was called cheating!

Aart also introduced the word systemic (yes I had to look it up) and a mathematical equation correction: Semiconductor design enablement results are not a SUM but a PRODUCT. As in, if anywhere in the semiconductor design and manufacturing equation there is a zero, the results will be a bad wafer, die, chip, or electronic device, which supports GFI’s vision for a new type of collaboration between partners and customers. 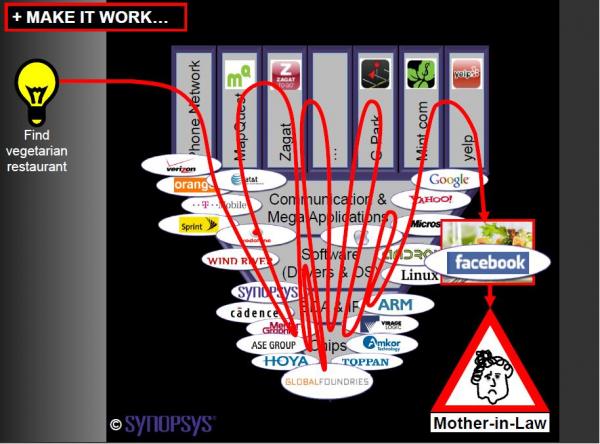 The other panel members had interesting stuff to say as well but I’m out of space. Joe Sawicki was very funny. I really like Joe but in my mind I was playing a game of “Where’s Wally?” This was a CEO panel so where was Wally Rhines? The CEO of ARM was also not there, Rajeev Madhavan, CEO of Magma, was not invited. Lip-Bu Tan, Cadence CEO was there but I would have preferred Cadence CMO John Bruggeman. Lip-Bu looked bored and only briefly mentioned EDA360. By definition, EDA360 is all about collaboration and should have been the centerpiece of the Cadence presentation. Just my opinion of course, but I am an internationally recognized industry blogger.