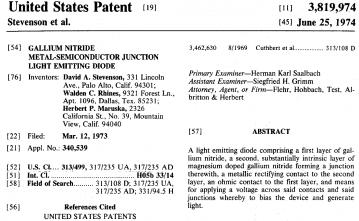 The Nobel Prize in Physics 2014 was awarded jointly to Isamu Akasaki, Hiroshi Amano and Shuji Nakamura “for the invention of efficient blue light-emitting diodes which has enabled bright and energy-saving white light sources”.

What they don’t say however is how America pioneered much of the work on the blue LED that a Japanese team of researchers “perfected”. Herbert Markuska actually developed the initial blue LED while at Stanford with fellow PhD student Wally Rhines (Wally is listed as a co-inventor on the patent issued in 1974 for this discovery). You can read more about it in the Oral History of Dr. Walden C. Rhines and A Brief History of GaN Blue Light-Emitting Diodes.


As the story goes, in 1990 while having dinner with Satoru Ito (who later became Chairman & CEO of Hitachi Semiconductor) Wally expressed concerns about the collapsing semiconductor industry in the U.S. The previous decade was a period of transition where the momentum of the U.S. dominated semiconductor industry had moved rapidly to Japan because of their superior manufacturing capabilities, particularly for memory devices. Ito-san said that the 1980s favored Japan because, “We are a nation skilled at optimization while the United States is a nation skilled at invention. The coming decades will be difficult for Japan because optimization requires stable standards like the MOS dynamic RAM, where improvements are evolutionary and there are no sharp discontinuities.” Ito’s brilliant insight was that as the computer and cell phone industries evolved in the 1990s and beyond it would be more difficult for Japan semiconductor companies because the products were changing radically in unexpected ways, unlike the semiconductor memories of the 1980s. Ito turned out to be right and the U.S. made a remarkable recovery through innovation and invention rather than optimization and manufacturing efficiencies while Japan struggled with rapidly changing and diverse standards.

It is interesting to note that the Nobel Prize announcement was carefully worded to emphasize that Akasaki, Amano, and Nakamura were being recognized “for the invention of EFFICIENT blue light-emitting diodes”. The inventor of the magnesium-doped gallium nitride light emitting diode, Herbert P. Maruska, was excluded from the prize. The Nobel Prize winners chose to base their work on Maruska’s patented discovery, including the specific materials used. The resulting press noted that Maruska was the inventor of the first blue light emitting diode in 1972 and questioned why RCA and the U.S. were unable to capitalize upon the invention. While Nobel Prize decisions involve many factors, there appears to be a more fundamental issue for the United States.

The free society fostered in the U.S. throughout its history has led to revolutionary inventions by people who could freely try things that were contrary to accepted norms. As Ito noted, the U.S. has, as one of its greatest strength, the ability to invent. Where the U.S. has fallen short is in optimization. Manufacturing, which requires rigid repeatability of operations without variation, has become a lesser strength in the U.S. as Asian countries have capitalized upon their own optimization capabilities. The issue is a more important one for the U.S. than the question of who should receive a Nobel Prize (although most believe that Maruska should have been included).

For the U.S. to capitalize upon its innately superior inventing ability, it must either partner with other nations who are most skilled at optimization, or develop a similar optimization skill in the U.S. Today’s outsourcing trends to Asia are effectively executing the partnering approach. Cell phones designed in the U.S. are manufactured in China. Innovative start-up companies outsource the production of their products to Asia. Longer term though, invention and optimization need to come together in close cooperation. The semiconductor industry grew up with offshore production for a large share of its labor intensive work but, until the last 20 years, the manufacturing was largely integrated with the parent company. For new products and ideas, foundries and offshore assemblers are available for just about any type of manufacturing. While this may be a very efficient approach, one might question whether this will lead to partnerships in new technology areas that will achieve the kind of partnering with U.S. companies that produces the best results. Would the optimization of the magnesium-doped gallium nitride blue LED have taken twenty years from the invention if the teams had been closely coupled?

0 Replies to “EDA and the Nobel Prize in Physics!”