Wally Rhines: Mentoring Generations of Semiconductor and EDA Professionals
by Mike Gianfagna on 04-10-2020 at 10:00 am
View Profile
View Forum Posts

Earlier this month during my conversation with Dr. Walden C. Rhines, he emphasised the need for our next generation designers to think at system level and design everything keeping the system’s view in mind. The verification will go through major transformation at the system level. I can see the FPGA prototyping systems already… Read More 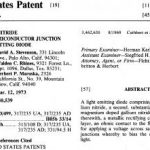 The Nobel Prize in Physics 2014 was awarded jointly to Isamu Akasaki, Hiroshi Amano and Shuji Nakamura “for the invention of efficient blue light-emitting diodes which has enabled bright and energy-saving… Read More