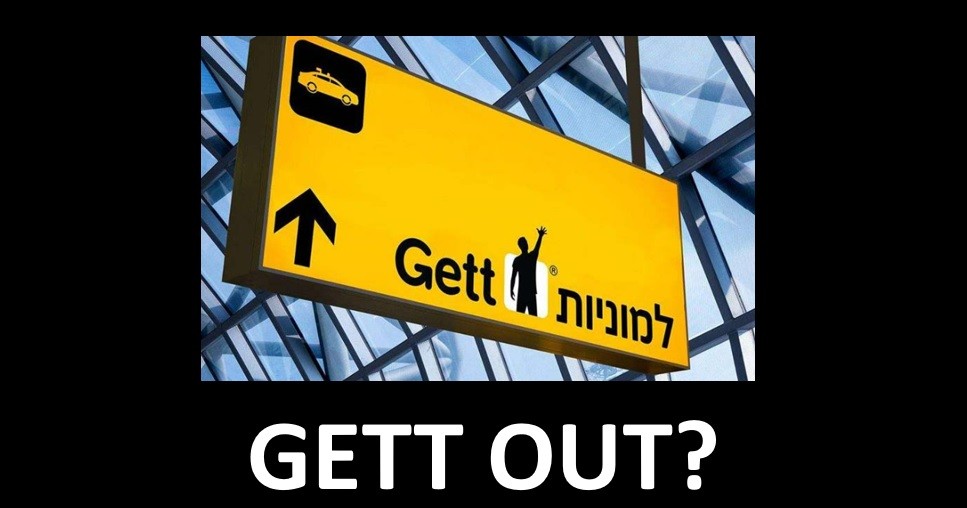 My suspicions were borne out by taxi driver protests throughout the world and by individual driver suicides. In this context, I was heartened when map-maker HERE introduced the world to HERE Mobility – an Israeli-based operation dedicated to the creation of a fleet management platform – which had all the earmarks of a global taxi aggregation solution. A way for taxi Davids around the world to take on ride hailing Goliaths maybe?

HERE Mobility looked to me like a global taxi-based alternative to ride hailing – a way for taxi operators to fight back against the ride hailing phenomenon. While HERE Mobility’s mission was broader than this, the ultimately doomed initiative (HERE Mobility shuttered its operations almost two years ago) highlighted the basic challenges facing the taxi industry in its efforts to take on app-based ride hailers.

That challenge – competing with an app – was further highlighted for me upon my arrival in Israel Saturday, to attend Ecomotion. While local taxi regulations in Israel supposedly require all taxis to accept credit card payments, the reality is something quite different and it highlights the fatal flaw in the taxi eco-system.

There are few things sketchier than a taxi driver driving a customer to an ATM to obtain cash to pay for the ride. It has all the earmarks of a hostage situation – particularly considering the need to leave the vehicle along with one’s possessions – to obtain that essential cash.

Everything worked out fine and there were no hard feelings, but the experience was a head scratcher. Didn’t this taxi driver understand that cashless payment was one of the core value propositions of app-based transportation from operators such as Gett and Yango in Israel?

The overwhelming convenience of a line of waiting taxis at the airport – or any other similar taxi “rank” – is vastly diminished if those taxis are insisting on cash payment. But the challenges facing taxi operators are even greater than that.

The cards are indeed stacked against individual taxi operators because the sector is both highly regulated and fragmented. The appeal of HERE Mobility lay in its ability to attract hundreds of taxi operators around the world to its aggregation platform.

Aggregation alone, though, was not enough to overcome the structural impediments to successful competition with ride hailing operators. Taxi app operator Curb has learned this reality the hard way.

In the U.S., where Curb operates, taxi regulators impose two burdens that are nearly impossible for drivers to overcome. First, taxis are generally not allowed to quote a fixed fare for a ride – with the exception of zoned fares which are predetermined in many markets. And, second, taxi operators are usually confined to operating within or out of a specific geographic area.

Curb has sought to overcome the first restriction be obtaining wavers – one market at a time in the U.S. – to allow participating drivers to quote fixed fares for a particular trip. Quoting a fixed fare is simply taken for granted for ride hail operators – but generally forbidden for taxis. The only thing working in favor of taxis, in respect to fares, is the inability of taxis to use surge pricing – but, if the traffic is heavy, the regular taxi passenger will pay more anyway.

As for the second issue, geographic constraints, taxi drivers hands are simply tied. A taxi operating out of Washington, DC, for example, can take a fare to the suburbs (which include three different states), but cannot turnaround and bring a fare from the suburbs back into the city – the Washington-based taxi must dead-head back to DC.

Ubers and Lyfts can pick up fares from almost anywhere and drop them almost anywhere with few, if any, constraints. We won’t even bother to dwell on the fact that these drivers are using their own or a rented car with limited regulatory oversight of the vehicle’s condition or operation.

All of these impediments – nearly unlimited geographic operating area, fixed pricing, personal/rental vehicle operation, non-existent regulatory oversight, app-based cashless convenience – mean that taxis simply do not have a prayer. Without significant regulatory review – less regulations for taxis or more regulations for ride hail operators – the days of taxis are limited as is their scope of operation.

The one policy strategy that seems to make sense and to have some enduring credibility is the option – taken in countries such as Germany and Turkey – to require ride hail companies to cooperate with existing taxi operators. This seems to be an effective working solution – but not one that has been universally adopted.

Taxi operators – highly regulated and fragmented – with taxi drivers clinging to their cash-centric ways of doing business, will need help to survive. If regulators are unwilling to impose a co-operative approach, then it’s time to lighten the regulatory burden to give the sector a fighting chance. This is especially true if existing regulations are either not enforced or routinely ignored.

We need taxis. We should not forget that ride hailing is a luxury proposition and transportation a societal necessity. The ride hailers should not be allowed to skim off the cream and leave the less profitable and less favorable fares to taxis. That’s not fair.

The Jig is Up for Car Data Brokers

ITSA – Not So Intelligent Transportation

2 Replies to “Taxis Don’t Have a Prayer”