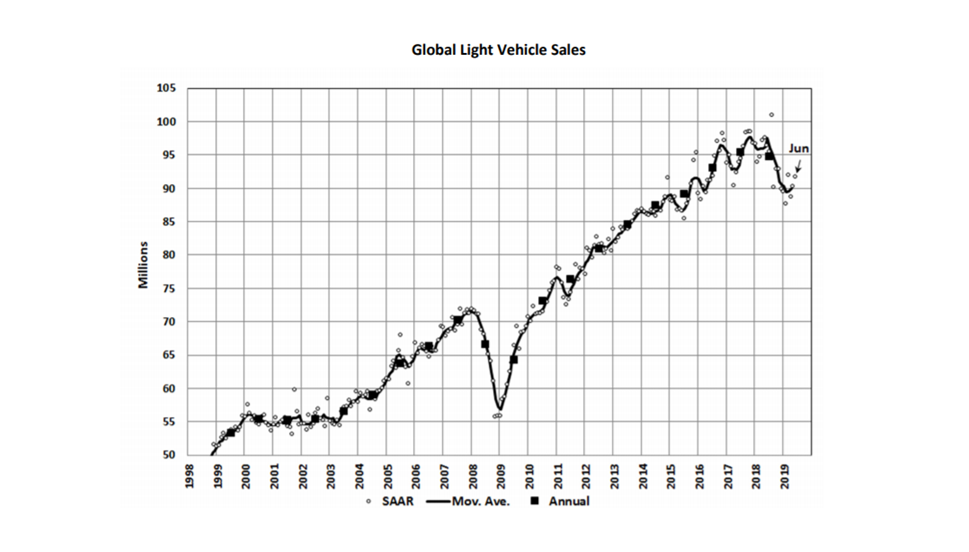 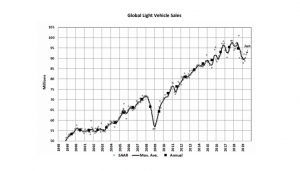 Reports from Reuters last week suggested that the European Union member states “should brace for U.S. tariffs on several fronts in the coming months,” based on the comments of a senior German official who had met with “U.S. officials and lawmakers” in Washington. Among other sectors in the Trump Administration’s crosshairs vis-a-vis the EU was automobiles.

This was only the latest twist in the ongoing automotive industry disruption emanating from Washington, which has coincided with a global downturn in vehicle sales – as reflected in recent reports from LMC Automotive and other industry forecasters. While LMC and its peers lay the blame for the decline on many causes, including changing emissions regulations in China, the largest global auto market, the Trump Administration factors into diminished growth calculations alongside Brexit and softness in demand elsewhere in Asia.

Some analysts also perceive a hit to vehicle sales arising from signs of declining vehicle ownership in both developed and developing markets – as consumers shift their dollars away from the expensive proposition of owning cars. It’s too early to say for sure, but a collateral outcome of tariff-based warfare between the U.S. and the rest of the world could stimulate mobility services like ride hailing and car sharing. It is easy to see how in China, Russia, Africa and Latin America, companies such as DiDi, Yandex and Uber are presenting a very real alternative to car ownership.

To be sure, forecasters have been reducing forecasted sales volumes for cars on an annual basis for several years. The latest adjustments, however, reflect a more dramatic downturn signaling an overall decline while also becoming something of a self-fulfilling prophecy: the market looks like it is declining, so the industry prepares for that decline.

One thing the Trump Administration has indisputably introduced into auto makers’ planning is a huge helping of uncertainty. Threats of import tariffs have stalled production and plant construction plans in the U.S. for some importers. And they have failed, in the short term, to stem auto industry job losses or stimulate hiring.

In effect, the ongoing confrontations over imports with China, Japan, Canada, Mexico, and the E.U. have frozen auto makers like deer in the headlights. At a time when the industry is in desperate need of maximum flexibility and nimbleness to respond to rapidly changing technology, the Trump Administration has instituted a global condition of strategic vapor-lock. Auto makers simply don’t know how matters beyond their control will sort out in the short or the long run.

This uncertainty is now telegraphed throughout the entire supply chain. Major suppliers to the auto industry are more than 12 months into their efforts to shift production away from tariff-impacted sources, if waivers can not be obtained. The global downturn has one certain impact, which is to shave off several percentage points of market growth – while threatening to take growth entirely off the table.

So car makers reduce their production targets. Suppliers reduce their expectations. Investment in plants, equipment and personnel are stalled. Progress comes to a standstill.

Is this Trump’s slump? That might be going too far to conclude. One thing is clear, though. The auto industry and investors have little tolerance for uncertainty. In the current uncertain environment, the only certainty is uncertainty. That is not good for any car company, regardless of where they make or sell their cars.

Another certainty is at risk in this equation. The automotive industry was once a reliable source of unmitigated growth thanks to steady demand in developed markets and growing demand from the developing world. That, too, is in question as mobility alternatives (ride hailing, car sharing) emerge in the developing world as an alternative to vehicle ownership and as developed countries use rules and congestion charges to limit access of privately owned vehicles to city centers. The trade wars of the Trump slump may actually end up giving a bump to mobility operators. While it may be good news – MAYBE – for mobility operators, it will be a bitter pill to swallow for auto makers.