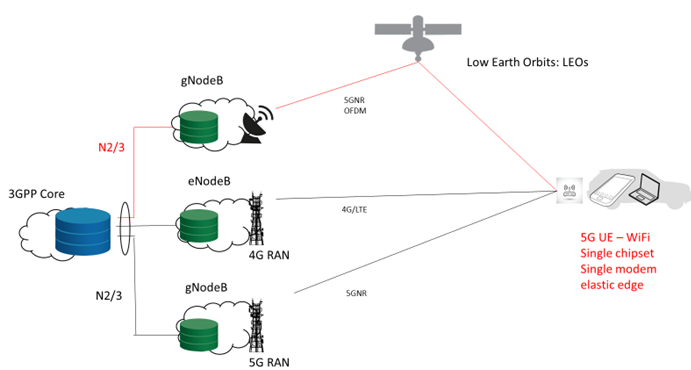 When SpaceX launched 60 satellites into orbit last month – the first of a planned fleet of 12,000 such satellites which will ultimately deliver terrestrial Internet access in concert with earth-bound stations – astronomers were alarmed at the apparent impact on earth-based observatories from light pollution. SpaceX CEO Elon Musk subsequently assured one and all that higher orbits and re-orientation of hardware would mitigate the problem. Of course, he added some Musk-ular snark by suggesting that space observations in the future should take place from orbit.

The launch and spectacular light show, though, underlined the turning point likely to soon impact multiple industries – not least of which will be the automotive industry. A new form of Internet connectivity is on the way – and this is but one as OneWeb is in the works as well while legacy players like Intelsat evaluate their options in a new world order where satellite connectivity is suddenly on the menu for passenger cars.

This has significance relevance to the automotive industry which struggles today with unreliable cellular signals at a time when cybersecurity, software updates, and autonomous operation demand reliable connectinos. On February 26th of this year, at Mobile World Congress in Barcelona, 25 attendees representing 13 industry-leading companies (Microsoft, SoftBank, Intelsat, OneWeb, among others) sat down to dinner to discuss this prospect.

From that dinner emerged the World Connected Car Alliance, an organization focused on enabling hybrid satellite-cellular connected vehicles with universal and constant connectivity solutions from both space and ground. The WCCA shows promise of bringing together satellite and cellular industries for the first time to embrace technologies that will enable the connected vehicle of today, and the autonomous vehicles of tomorrow.

Two distinct models for the architecture of autonomous vehicles (AVs) have emerged. One is for a self-contained, mostly unconnected car with all sensors and crucial systems onboard, which only exchanges data with the Internet when necessary. The other represents an always-connected vehicle that relies heavily on the computing power and real-time driving experience of other vehicles provided by the cloud.

It’s likely that most AVs will fall somewhere between these two extremes, and the decision about the degree of reliance on the Internet will be influenced by such considerations as safety, security, cost, and most of all, the reliability and ubiquity of the off-board communications system. However, there is no doubt that all AVs will be powerful computer systems with all of the software refresh capabilities that that implies. AVs will also be an extension of living room, delighting passengers with various entertainment models that are starting to emerge. All AVs will need robust communications.

Before there was General Motor’s Onstar, Volvo Cars had set in motion a plan for a hybrid cellular-satellite connected car system working with Orbcomm. Of course, this was back in the days of analog cellular technology and before Orbcomm had filed for bankruptcy. Needless to say, this Volvo system never made it to market – but its existence reflected the automotive industry’s preference for a belt and suspenders approach to connectivity that could guarantee the vehicle connection.

Satellite has historically sought out the desperate and wealthy to deliver the connectivity of last resort. This meant, among others, rural, maritime, oil, gas, and mining verticals. This also meant an ever-diminishing part of the planet that was not covered by terrestrial LTE was the target of satellite. Traditional satellite companies’ fear, above all other things, was commoditization. This is ironic considering they are a commodity, and learning to be a commodity will make them successful.

The approach WCCA brings satellite into the mainstream of competitive communications. This means that satellite will augment and support autonomous fleets and vehicles. There are vast areas of the Autobahn that have no connectivity, and wireless access along the M40 or the U.S. Interstate system is often non-existent. There are holes in terrestrial networks that leave many suburban and secondary roads all over the world disconnected. If satellite is blended and integrated with terrestrial communications so that an IP address persists, and the application session holds while switching between satellite and terrestrial, then a major piece of the ‘reliable and ubiquitous’ puzzle is solved.

The 3GPP core sees the satellite as just another cell tower. Pricing is competitive with terrestrial. 5G and LTE extend their reach and coverage with satellite infrastructure. Hybrid connectivity would mean an enhanced level of security and safety for autonomous vehicles by delivering constant contact.