As I have written before, IoT looks to be a key driver for design starts and future semiconductor revenue growth which is why we wrote “PROTOTYPICAL” and included a field guide to FPGA Prototyping. If you want to get funding for your new IoT chip project, having a working prototype is a good thing, absolutely. If you want to take a look… Read More

The Internet of Things encompasses a wide range of connected services, technologies, and hardware devices. Yet, for consumers, it is the growing number of portable and wearable devices that will be their main interface with IOT tech. The wearable device market is rapidly evolving, especially when it comes to smart watches and… Read More

Watching worlds of mobility, entertainment, and social media collide and helping customers navigate through this new technological landscape has been my passion for the last few years since I founded Left2MyOwnDevices. As a new arrival in Texas, I had my first chance to see just how big the convergence is at the premier event in… Read More

As the smartphone industry has begun to mature, one-upmanship among smartphone manufacturers and SoC vendors has bred a dangerous trend: ever-increasing processor core counts and the association between increased CPU core count and greater performance. This association originated as SoC vendors and OEMs have tried to find… Read More

Where have all the semiconductor drivers gone?
by Bill Jewell on 11-24-2014 at 11:30 pm
View Profile
View Forum Posts

Tablets and smartphones have been key drivers of electronics and semiconductor growth for the last few years. However the growth rates for these devices are slowing as they have become more prevalent. Tablet shipments are expected to reach 229 million units in 2014, according to Gartner, equal to 73% of PC units. IDC projects smartphones… Read More

With a well-chronicled share inside cellular baseband interfaces for mobile devices, one might think that is the entire CEVA story, especially going into Mobile World Congress 2014 this week. MWC is still a phone show, but is becoming more and more about the Internet of Things and wearables, and CEVA and its ecosystem are showing… Read More 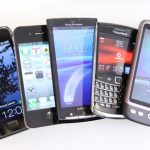