Register / Log In
Guests have limited access.
Join our community today!
You are currently viewing SemiWiki as a guest which gives you limited access to the site. To view blog comments and experience other SemiWiki features you must be a registered member. Registration is fast, simple, and absolutely free so please, join our community today!
ReRAM Revisited
by Bernard Murphy on 11-06-2019 at 6:00 am
View Profile
View Forum Posts 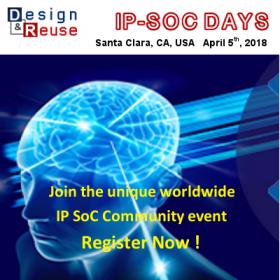 On Thursday April 5[SUP]th[/SUP] the Design and Reuse SoC IP days continues in Santa Clara at the Hyatt Regency (my favorite hangout). SemiWiki is a co-sponsor and I am Chairman of the IP Security Track. More than 400 people have registered thus far and I expect a big turnout, if you look at the program you will see why. You should also… Read More

Webinars are a very effective communications channel in a fast paced industry like semiconductor design. If you sign-up in advance and you can’t make the live version, you will be automatically notified when the replay is available so you can watch it at your leisure. I’m guilty of this for sure, because of my hectic… Read More

The growth of mobile and IoT have helped increase the demand for One Time Programmable Non Volatile Memory (OTP NVM) as a solution for on-chip storage. To continue to meet this demand and grow with it, industry leading Sidense has recently brought on board seasoned semiconductor executive Ken Wagner as VP of Engineering. He was … Read More

Memory is a big enough topic that it has its own conference, Memcon, which recently took place in October. While I was there covering the event for SemiWiki.com I went to the TSMC talk on memory technologies for the IoT market. Tom Quan, Director of the Open Innovation Platform (OIP) at TSMC was giving the talk. IoT definitely has special… Read More

I have written about Sidense before, but last week at the TSMC Open Innovation Platform Forum, I had a chance to hear a talk by, and have lunch with Betina Hold Director of R&D at Sidense. Here is what I learned.

Sidense has been focusing on the growing market in what they like to call the smart connected universe. It is best to think… Read More