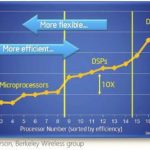 When you looked at a chip in the past you primarily were concerned with two things: the speed of the chip, usually expressed in GHz, and how much power it consumed. Today the IBM engineers preparing the newest POWER chip, the 14nm POWER9, are tweaking the chips for the different workloads it might run, such as cognitive or cloud, and… Read More

I just came across and interesting video from last year’s Hot Chips conference. Dr. Robert Colwell of DARPA discusses how the processor design industry is likely to change after it becomes too difficult to continue scaling transistors to ever-smaller dimensions. This is likely to occur sometime within the next decade,… Read More