Webinar: Rapid Exploration of Advanced Materials (for Ferroelectric Memory)
by Tom Dillinger on 03-30-2021 at 6:00 am
View Profile
View Forum Posts

There are many unsung heroes in our industry – companies that provide unique services and expertise that enable the rapid advances in fabrication process development that we’ve come to rely upon.  Some of these companies offer “back-end” services, assisting semiconductor fabs with yield diagnostic engineering and failure analysis.  Some are “front-end” companies that pursue advanced research into promising new materials and processing techniques, and then assist with technology transfer to production manufacturing.  We tend to focus on the large semiconductor foundries and their process roadmaps, yet the underlying support from these engineering firms is fundamental to the industry as a whole.

With each new process node, extensive investigations into new materials are pursued, to determine the optimum stoichiometry and electrical properties.  This is especially evident in the pursuit of alternative memory technologies.  A specific example is the introduction of new ferroelectric materials for very high density, non-volatile data storage.

A ferroelectric material is a special dielectric, in that it exhibits two (stable) remanent polarization states.  The figure below illustrates the hysteresis curve of the crystalline polarization when an applied voltage is cycled across the dielectric – note the two intersections of the curve with the vertical axis when the applied voltage is zero, representing the stored “state” of the material.

Note in the figure that the chemical bond orientation in the material differs slightly in the two states, resulting in the remanent polarization.

The two polarization states of the ferroelectric material suggest that it may be used as part of a memory bit circuit implementation.  The figure below illustrates a couple of potential implementations: 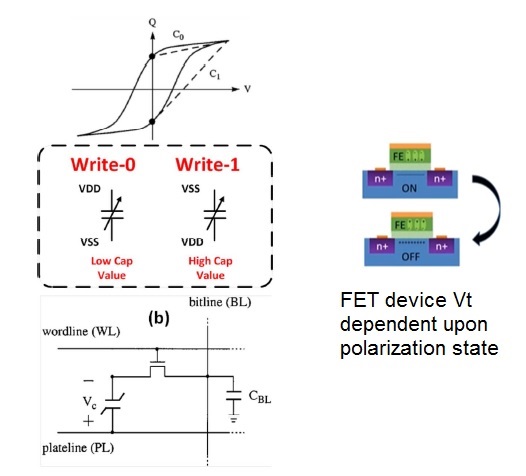 One depicts the ferroelectric material as a replacement for the storage capacitor in a 1T1C bitcell.  Unlike a conventional DRAM, note that no refresh of storage charge due to leakage current is required – data storage is represented by a dielectric polarization state, not by the amount of charge stored on the bitcell capacitance.  The other implementation depicted above shows the ferroelectric material directly integrated in the dielectric gate stack of a field-effect transistor.  The two polarization states of the material will result in different threshold voltages for the device, representing the stored data value.

As you might imagine, the crystalline properties of the dielectric material are crucial to the magnitude of the polarization states and the opening of the hysteresis curve.

I had an opportunity to view an outstanding webinar from Intermolecular, describing their recent investigations into ferroelectric materials.  Their prototype fab capabilities provided atomic level deposition (ALD) of a variety of hafnium oxide (HfO2) and zirconium oxide (ZrO2) films.

An image from the webinar is shown below, for the case of HfO2.  There are three crystalline topologies for these oxides, however only one demonstrates attractive ferroelectric behavior.

It is therefore necessary to ensure the process flow for depositing (and crystallizing) the film results in a very high percentage of material with the desired crystalline structure.

Another process experiment pursued by the Intermolecular team evaluated the ferroelectric properties of a stoichiometric mix of hafnium and zirconium in the dielectric in a single thin film, as well as stacking separate ALD-deposited HfO2 and ZrO2 layers.

Even if you’re not directly involved in advanced process development, I would encourage you to view this webinar presentation from Vijay Narasimhan at Intermolecular.  It is extremely informative, starting with the basics of ferroelectricity, and offering insights into the R&D flow for materials evaluation – e.g., deposition/annealing, crystalline spectroscopy, and electrical characterization.

Here is the webinar link.

Here is a link to more information on the front-end services provided by Intermolecular. 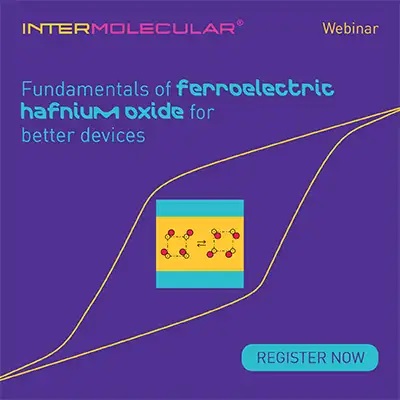