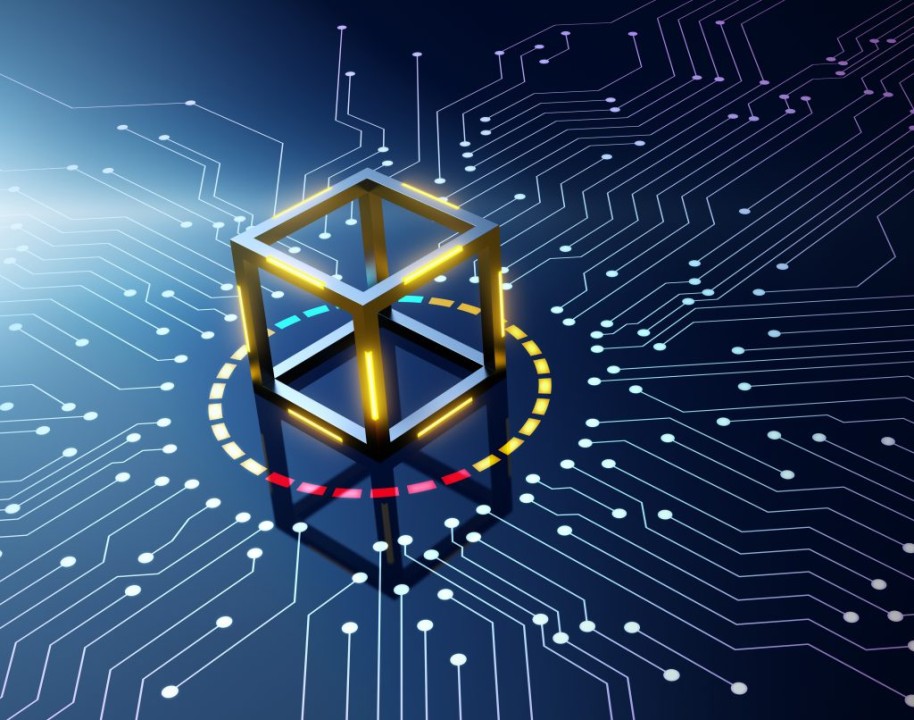 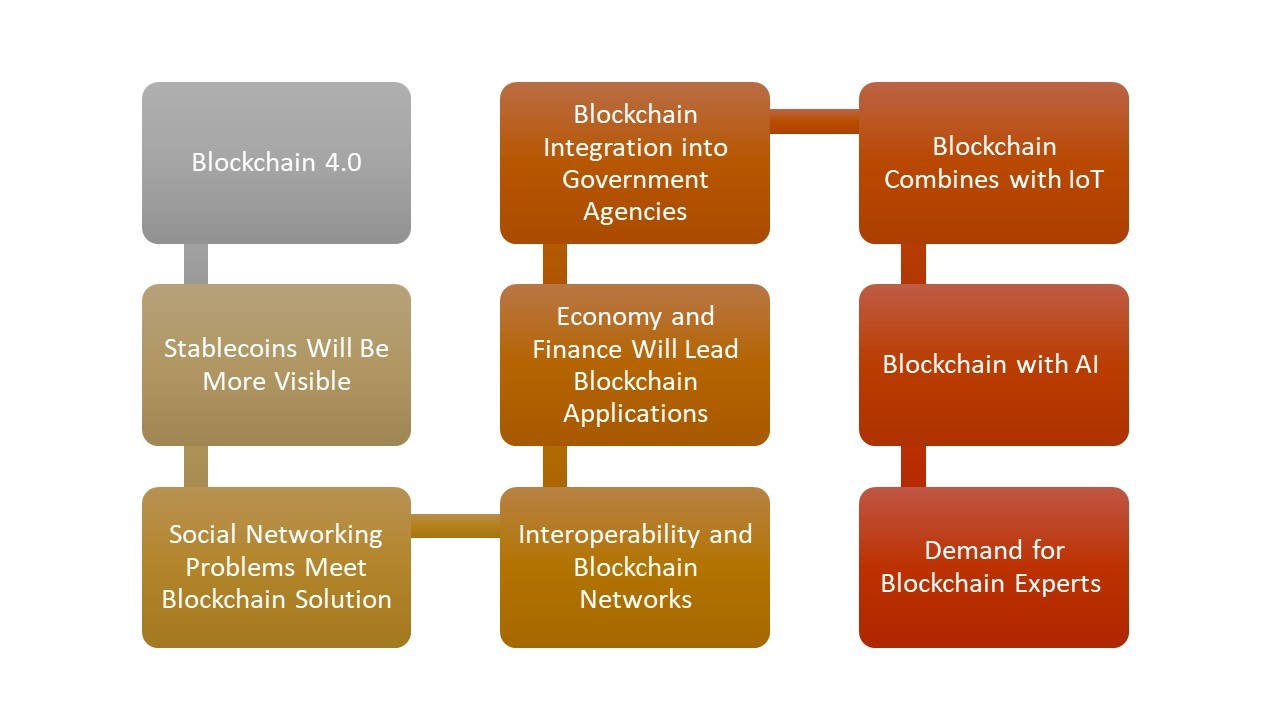 It’s clear that blockchain will revolutionize operations and processes in many industries and governments agencies if adopted, but its adoption requires time and efforts, in addition blockchain technology will stimulate people to acquire new skills, and traditional business will have to completely reconsider their processes to harvest the maximum benefits from using this promising technology. [2]

The following 9 trends will dominate blockchain technology in 2023:

Blockchain 4.0 is focused on innovation. Speed, user experience and usability by larger and common mass will be the key focus areas for #blockchain 4.0. We can divide Blockchain 4.0 applications into two verticals:

The 2008 global financial crisis exposed the cracks in centralized control, paving the way for decentralization. The world needs Web 3.0- a user-sovereign platform. Because Web 3.0 aims to create an autonomous, open, and intelligent internet, it will rely on decentralized protocols, which blockchain can provide.

There are already some third-generation blockchains that are designed to support web 3.0, but with the rise of Blockchain 4.0, we can expect the emergence of more web 3.0 focused blockchains that will feature cohesive interoperability, automation through smart contracts, seamless integration, and censorship-resistant storage of P2P data files.

The dream projects of tech giants like Facebook, Microsoft, Nvidia, and many more, Metaverses, are the next big thing for us to experience in the coming few years. We are connected to virtual worlds across different touchpoints like social engagement, gaming, working, networking and many more. Metaverse will make these experiences more vivid and natural.

Advanced AI, IoT, AR & VR, Cloud computing and Blockchain technologies will come into play to create the virtual-reality spaces of metaverse , where users will interact with a computer-generated environment and other users through realistic experiences.

Centralized Metaverse entails more intense user engagements, deeper use of internet services and more uncovering of users’ personal data. All these almost likely means higher cybercrime exposure. Giving power to centralized bodies to regulate, control and distribute users’ data is not a sustainable set-up for the future of Metaverse. Therefore, much emphasis has been placed on developing decentralized Metaverse platforms that will provide user autonomy. Decentraland, Axie Infinity, and Starl, these are all decentralized Metaverses powered by Blockchain:

Also, Blockchain 4.0’s advanced solutions can help Metaverse users regulate their security and trust needs. Take the Metaverse gaming platform, for example, where users may purchase, possess, and trade in-game items with potentially enormous value. Proof of ownership through something as immutable and scarce as #NFTs will be required to prevent forgery of these assets.

At the end blockchain 4.0 will enable businesses to move some or all of their current operations onto secure, self-recording applications based on decentralized, trustless, and encrypted ledgers. Businesses and institutions can easily enjoy the basic benefits of the blockchain.

2. Stablecoins Will Be More Visible

Using Bitcoin as an example of cryptocurrencies its highly volatile in nature. To avoid that volatility, #stablecoins came to the picture strongly with stable value associate with each coin. As of now, stablecoins are in their initial phase and it is predicted that 2023 will be the year when blockchain stablecoins will achieve their all-time high. [1]

There are around 4.74 billion social media users around the globe in 2022.

The introduction of blockchain in social media will be able to solve the problems related to notorious scandals, privacy violations, data control, and content relevance. Therefore, the blockchain blend in the social media domain is another emerging technology trend in 2023.

With the implementation of blockchain, it can be ensured that all the social media published data remain untraceable and cannot be duplicated, even after its deletion. Moreover, users will get to store data more securely and maintain their ownership. Blockchain also ensures that the power of content relevance lies in the hands of those who created it, instead of the platform owners. This makes the user feel more secure as they can control what they want to see. One daunting task is to convince social media platforms to implemented it, this can be on a voluntary base or as a results of privacy laws similar to GDPR. [1]

Unlike other traditional businesses, the banking and finance industries don’t need to introduce radical transformation to their processes for adopting blockchain technology. After it was successfully applied for the cryptocurrency, financial institutions begin seriously considering blockchain adoption for traditional banking operations.

Blockchain technology will allow banks to reduce excessive bureaucracy, conduct faster transactions at lower costs, and improve its secrecy. One of the blockchain predictions made by Gartner is that the banking industry will derive billions dollars of business value from the use of blockchain-based cryptocurrencies by 2023.

The idea of the distributed ledger is also very attractive to government authorities that have to administrate very large quantities of data. Currently, each agency has its separate database, so they have to constantly require information about residents from each other. However, the implementation of blockchain technologies for effective data management will improve the functioning of such agencies.

According to Gartner, by 2023, more than a billion people will have some data about them stored on a blockchain, but they may not be aware of it. Also, national cryptocurrencies will appear, it’s inevitable that governments will have to recognize the benefits of blockchain-derived currencies. Digital money is the future and nothing will stop. [3]

The IoT tech market will see a renewed focus on security as complex safety challenges crop up. These complexities stem from the diverse and distributed nature of the technology. The number of Internet-connected devices has breached the 26 billion mark. Device and IoT network hacking will become commonplace in 2023. It is up to network operators to stop intruders from doing their business.

The current centralized architecture of IoT is one of the main reasons for the vulnerability of IoT networks. With billions of devices connected and more to be added, IoT is a big target for cyber-attacks, which makes security extremely important.

Blockchain offers new hope for IoT security for several reasons. First, blockchain is public, everyone participating in the network of nodes of the blockchain network can see the blocks and the transactions stored and approves them, although users can still have private keys to control transactions. Second, blockchain is decentralized, so there is no single authority that can approve the transactions eliminating Single Point of Failure (SPOF) weakness. Third and most importantly, it’s secure—the database can only be extended and previous records cannot be changed [7].

The International Data Corporation (IDC) suggests that global spending on AI will reach $57.6 billion by 2023 and 51% of businesses will be making the transition to AI with blockchain integration.

Additionally, blockchain can also make AI more coherent and understandable, and we can trace and determine why decisions are made in machine learning. Blockchain and its ledger can record all data and variables that go through a decision made under machine learning.

Moreover, AI can boost blockchain efficiency far better than humans, or even standard computing can. A look at the way in which blockchains are currently run-on standard computers proves this with a lot of processing power needed to perform even basic tasks

Even though the number of experts in blockchain fields is increasing, on the other hand the implementation of this technology has a rapid growth which will create a situation for the demand of Blockchain experts by 2023. [3]

It’s worth saying that there are genuine efforts by universities and colleges to catch up with this need including San Jose State University with several courses covering blockchain technology, but the rate of graduating students with enough skills to deal with blockchain technology is not enough to fill the gap. Also, Companies are taking steps to build on their existing talents by adding training programs for developing and managing blockchain networks.

The Role of Clock Gating

A Crash Course in the Future of Technology