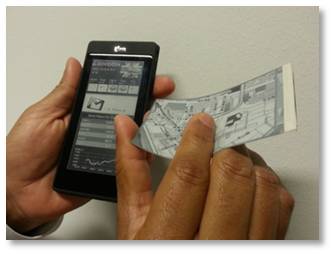 Extreme inter-connectivity is one of the more useful features that is appearing in new products. Phones will wirelessly link and sync with screens and sensors in the user’s vicinity.

For example, there is already activity to equip phones with NFC in order to transfer data by tapping the phone to a set-top box or TV. More context-aware automatic wireless linking is coming too. In addition, giant e-commerce, software, and semiconductor companies are said to be creating Wi-Fi networks to compete with cellular services.

You can also expect extreme sensor support. On a more intimate (and bizarre) scale certain companies and universities are experimenting with tattoos to provide sensor and control capabilities for mobile devices. In the works are new kinds of proximity sensors, accelerometers, pressure sensors/altimeters, chemical sensors and more.

Biomedical sensors have lots of potential. For example, non-invasive glucose monitoring and vein mapping is being developed by a major cell phone maker now as a way to enhance fitness and health sensing. Vein mapping is already on PCs in Japan for user ID.

Another angle on human-to-machine interaction is the password pill presented by DARPA alums now working at a major cell phone maker. Once swallowed, the pill is powered up by electrolytes in the body to create a signal making one’s entire body into an authentication token. When the user touches the phone, computer, car, or whatever, the user is thus authenticated into that system.

Prototypes of extreme screens are now available. These bi-stable, reflective displays used in e-books merge with wireless technology to create a type of external or secondary smartphone screen. The idea is to allow the phone to send an image like a map to a secondary screen.

Being bi-stable a secondary screen can retain the image without power so the user can refer to it while driving without having to turn on the phone again. The idea lends itself well to tablet covers which scream out for a dual purpose such as a secondary display, an extra battery, a solar panel or an external flat speaker. Apple has a patent on related to this notion.

Several smartphone makers have clear strategies to take photography to extremes. One company already has a 40 megapixel camera on the market. Others are using detachable lenses that connect wirelessly to the phone and tablet.

Major smartphone and chipset makers are experimenting with multi-lens arrays to make computational light-field cameras. The technology captures complete depth of field information about a scene allowing the user to refocus after the fact to highlight different subjects, change the scale, change backgrounds, apply different filtering and do other edits without a PC.

On the display side, we may be moving into the overkill zone with extreme resolution. Screen makers have already demonstrated displays with twice the performance of 1080-progressive.

It’s reasonable to ask why anyone would want a small screen with higher resolution than one’s eyes can practically discern. However, the point is that this technology is already out and once something exists it is a very short journey to copycat behavior.

— Bill Boldt is a marketing executive, market researcher and consultant, and can be reached at Boldtassoc@gmail.com