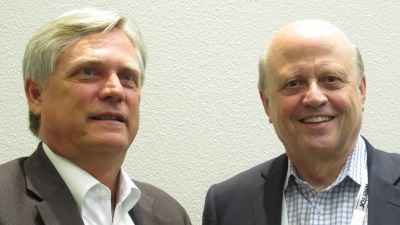 First stop: Chuck Grindstaff’s (Executive Chairman, Siemens PLM Software Inc.) keynote, we were then afforded a Q&A session with Chuck and Wally afterwards. I also had a chat with Chuck in the hallway.

The Age of Digital Transformation
EDA has continually moved to higher levels of abstractions, changing how electronics are designed and created. Now we are seeing the need in the industrial world for further digitalization and virtualization.In his keynote, Chuck Grindstaff, Executive Chairman of Siemens PLM Software, will discuss the global impact of this digital transformation. EDA pioneered this revolution and paved the way for today’s digital industrial revolution that is transforming and disrupting all industries. For system companies, their products are evolving into advanced system of systems. As a result, SoCs and application software are now the core differentiation and enabling technologies. This is spurring growth and opportunity for IC designers in the convergence of semiconductor and systems. Siemens and Mentor together are setting the vision for this new era of digital transformation.

The Q&A was interesting but it was mostly press people. My question was: Who called who first on the acquisition? Chuck said he made the first call but Wally added that they had their first acquisition talk nine years ago when Cadence (Mike Fister’s last stand) tried a hostile takeover. Siemens was on Wally’s list of white knights. I then asked Chuck point blank if he was going to sell the Calibre unit since it is not part of the Siemens core business and competition for that market segment is stronger than ever before. Chuck bluntly said no, why would he? My reply was money and I added that I wasn’t in the market to sell my house but if someone offered a billion dollars for it I would sell. I also said the Mentor Calibre unit is worth more today than it probably will ever be. My bet is that there would be a feeding frenzy between Synopsys, Cadence, and a Chinese holding company. Chuck disagreed but did say maybe for the right price, then he reminded me of how big Siemens is so their right price is probably higher than one might expect. By the way, Siemens is an $89 billion company while Synopsys is $2.4 billion, Cadence is $1.8 billion, and Mentor is $1.3 billion.

The hallway chat was even more revealing. Chuck and I had a blunt conversation and my feeling is that Chuck is a true competitor like Mentor management has never seen before. Remember, Chuck has CAD running through his veins from his many years at Unigraphics which was acquired by Siemens and he IS from Texas…