First, I must say that I’m biased. I like Cheerleaders, they are lots of fun, I even married one. Second, I’m not a fan of Peggy Aycinena. She has been on her EDA feminist rant for years now and I have been targeted multiple times. My solution has been to ignore her and any publication that supports her but this time she has gone too far.

Then I read an article by Mike Demler:

As the industry continues to shrink, can EDA bring sexy back?

Mike is a great guy, I’m a fan of his site, he is very credible:

DAC organizers made some initial attempts to liven up the proceedings, by signing up a few of the San Francisco 49er cheerleaders to wake up attendees before an 8:30 AM keynote address, on the second day of the conference. The cheerleaders, who regularly appear before crowds (including many families) of 70,000 fans at every 49er home game, also are known for their charitable work, and for their careers and education beyond the football field. Nevertheless, according to sources who would only speak off the record, when a female EDA blogger launched a personal protest of the cheerleaders, contacting EDAC Board members and DAC organizers, they cancelled the appearance. Attempts to get a statement from the DAC Executive Committee have gone without a response. Gold Rush management has also declined to comment.

After reading this, I felt sure Peggy was behind it but could not confirm and Paul McLellan was not talking. Paul is the official DAC webmaster so I understand his tight lips. I also understand the decision by the DAC people to cancel to avoid controversy.

I do read John, don’t always agree with him, but certainly respect the work he has done on DeepChip:

I can’t believe this. The DAC Executive Committee caved into to the angry feminazi rants of Granny Peggy Aycinena????? WTF? Just because Peggy wouldn’t have appreciated these cheerleaders, a good 90% of the heterosexual male population at this DAC would have! WTF???

Okay, John is being crude here but I agree with his point. I don’t like a moral majority of one person making decisions on what is and is not appropriate for an entire crowd.I also don’t appreciate the negative label Peggy attaches to the 49er Cheerleaders. They are athletes, goodwill ambassadors, and they deserve better(I bold this because it is the main point of this blog).

Gabe Moretti also did an article on this (according to John Cooley) but I don’t read his site Gabe on EDA and it did not come up on Google. Maybe he thought better than to get on Peggy’s bad boy list and deleted it. Or maybe Gabe’s site is not search engine friendly. Probably both. 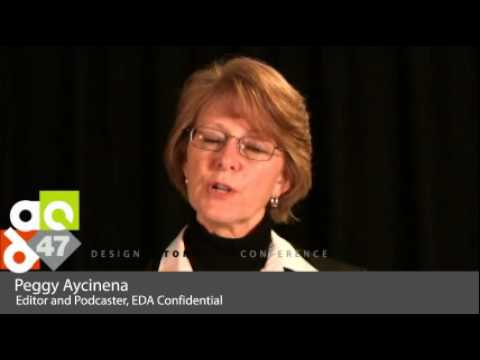 Peggy’s response to all this did come up on Google to which I’m reading for the first time:

Cooley: Ignore the men behind the curtain by Peggy Aycinena

This rant is so fractured I don’t even know what to cut and paste so you will just have to read it yourself. She goes “eye for an eye” with John attacking him personally and with increased venom. Included is a list of people she has pissed off and I’m on it and this is why.

Last year Paul McLellan did an article on SemiWiki: Semiconductor Virtual Model Platforms which included a picture of a female model (nothing racy). Peggy posted a rant against Paul, me, and SemiWiki so we changed the pic to what you see today. That rant was also removed after Paul bought her lunch to smooth things over. Even better, Peggy once called some of the DAC hostesses (booth babes) prostitutes. That article was removed as have most of her other rants. This latest one will probably be removed so I saved a copy just in case because it really is quite funny in a disturbing sort of way.

This was my 29[SUP]th[/SUP] DAC so I have seen the evolution first hand. In fact, I was pleasantly surprised when DAC allowed alcohol on the show floor, which apparently Peggy is okay with, for now anyway. My opinion: We are adults and can make personal choices as we see fit. It would have been nice to have been allowed the choice of attending the 49er Cheerleader DAC session or not. Next year hopefully an actual majority will prevail and we will see Cheerleaders serving beer!