The year is now 1991 and in search for a more peaceful life we decided to move to Canada. At that time, very few companies had advanced flows in VLSI but Ottawa having BNR, Northern Telecom, Mitel, etc., looked to be the most promising place. After a few hiccups in finding a job, I landed in MOSAID, a small company with35 people at that time. From Motorola with central CAD who qualified all tools and PDKs with local CAD who built specialised tools, to a company with no CAD at all. MOSAID was a small design services company specialized in DRAM. One division was doing only design services the other was designing and building very advanced and specialized engineering testers for memories. I was in a new country, new company, new language and no CAD support. This was great opportunity to start fresh using all previous experience in tools, flows, etc. MOSAID Semiconductor division did not have a layout team at all, so I accepted the position of supervisor of the new IC Layout group with 5 members. We were using Apollo machines and Chip graph software for layout, hardware & software coming from Mentor Graphics. Slow and limited for layout but very good for circuit design as it had the “case frames” system in schematic entry, something Cadence does not have until today.

The layout was tedious as no PCELLS available. We had a good coding guy in our team, Karl Skjaveland, who already started to add some automation in AMPLE code bindkeys, device generators, etc. Soon enough Mentor came up with the new revolution in their software called IC Station,this was the answer to Cadence OPUS environment. New software meant that we needed to develop new bindkeys as we had specialized memory application to support and we already had our setups in Chipgraph. We got lucky, we got the visit of Ed Fisher, the engineering manager for IC Station development. Ed came to Ottawa and spent a week with the layout team observing how we work, learnt why we do what we do and took our bindkey to productized them as part of IC Station new releases. We were very happy that we contributed to next generation tool. With this new IC Station came new additions, tools that had automation in mind and I wanted my team to try everything. We invited Glenn Thorstensen to Ottawa and tried the new IC Plan, IC Block, IC Route, IC Verify and all other new software available for layout. Unfortunately, none was useful “as is” for memory design and we did not have CAD to help customization, but we did learn a lot about other IC Station features related to these tools.

We learnt the most important thing,thinking FLOW is more important than thinking one tool solution.

Around 1995 another revolution came to VLSI layout, IC Craftsman, the first “shape based router”. The company was Cooper & Chan Technologies (known as CCT) and they came to DAC to present it. A very refreshing move was to bring early advance users to demo the tool. This is how I became friend with Jack Wild and Paul Mason. I really liked this router but I was in Mentor Graphics environment and there was no integration between the 2 platforms. You needed to export and import GDSII to use the router, but this did not stop me get one copy. First time we used the router in a 16Mb SDRAM central channel and we finished the work in 1 week instead of 3 with all the setup time. This was very good for MOSAID but not good enough for me! Following year, I spoke with 2 important people in CCT, Mr. Chan and Dave Reed. I explained them that a router without a placer built by the same team is only half job. Mr. Chan started to look at options and solutions for devices and cells placement and the following year at DAC we sat together and reviewed progress and options. I remember the debate on device generation “with” or “without” contacts… 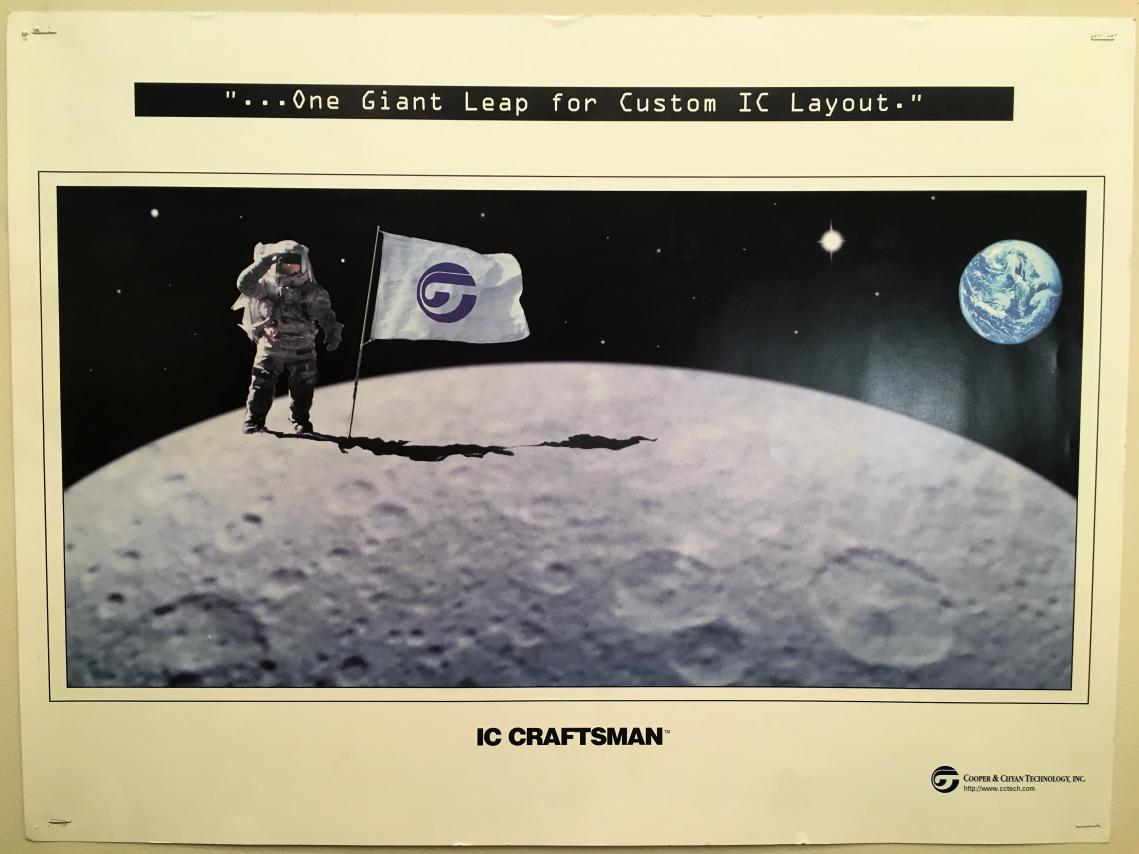 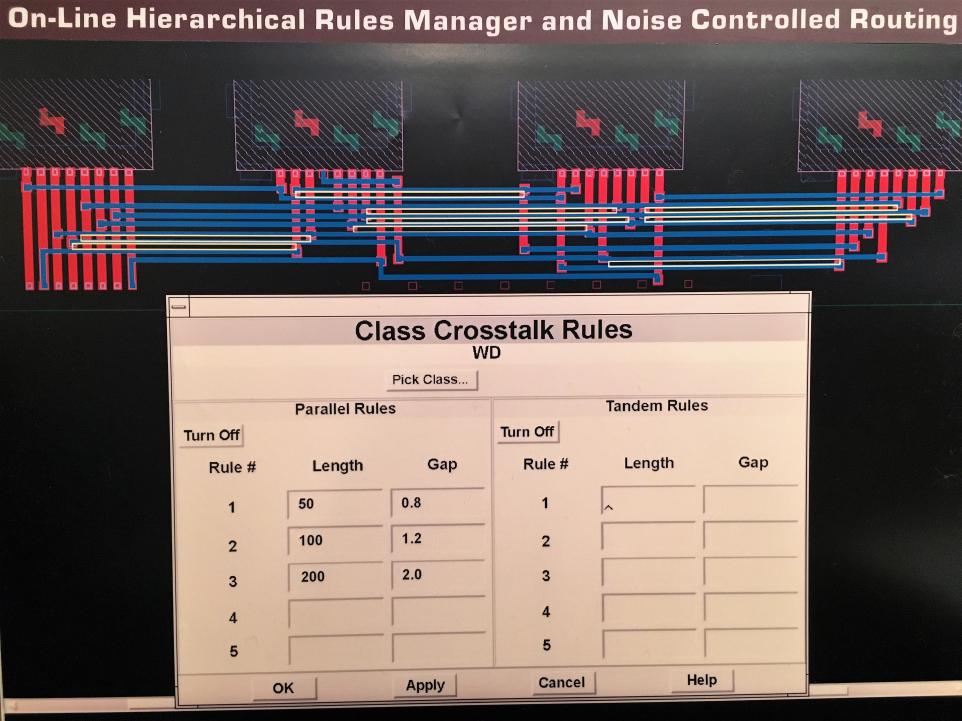 The idea was that the router can add the source/drain contacts! The problem is that in 1997 CADENCE bought CCT for the router and they wanted to kill this new baby placer, they already had 5 of their own placers. I am coming to DAC to see the new placer, called Dev Place, and there is no demo for it, nothing… CCT booth became resting area… Went to Dave Reed to find out how can I see the final product but learnt that the software is on the way OUT. The only option was to gain users support and force CADENCE to let it fly to see if it is more successful than other internal products or not. At that DAC I convoked all my industry friends to go to Cadence and ask for a demo of Dev Place. John Cohn brought almost all IBM participants at that DAC for demos. My friends from Intel, Motorola, AMD, all Israelis I knew went for the demos and we won! Very excited I came back to Ottawa and ask Cadence country manager, at that time, Nick Deeble for a copy of the software. Guess what, it was not even on the list for software to sell. So we had a “special deal”: I get the software AS IS, with no maintenance, no future updates, no bug fixing and no support. We payed the money and got the software. Charlie Houck, the AE who came a year earlier to install IC Craftsman came again to help us get Dev Place up and running. I was lucky to get people who knew their “stuff” and were exited to help. Now was time to show my management in MOSAID why we spent the money.

I started to work with one of my colleagues Andrew Holban to figure out how can we integrate IC Craftsman and Dev Place into a flow including IC Station. We worked together before in MSIL and he followed me to Canada. His job was not really CAD but LayCAD, meaning helping layout with automation but nobody else was available at that time. After a IC Craftsman success, we had a few brainstorming discussions with the whole layout team and we came out with a flow. Andrew called it C.A.R.IN.A. – Cadence Automated Routing Interface Application. Below is what Andrew built: a text based user interface capable to help a layout designer plan, place and route 500+ standard cells from and into IC Station with 100% clean DRC and LVS at 350 nm process level. How?

Using a plain text file on the screen, through questions & answers the script was providing the building box of the required block: size in X and Y directions, side on which you want the pins to be in order or not, and numbers of rows for placement.

This box was exported through GDSII to CCT environment together with the design netlist and a library with all cells involved. Kind of LEF, DEF and .lib in the digital world.

The script exported back the placement and routing into IC Station through GDSII and ran the verifications required, in that case was still Dracula.

We promised management that with C.A.R.IN.A. we will finish a block of 500+ cells for a memory periphery (layout in rows) in 1 day compare with the hand crafted 5 days best results. On the first demo Andrew finished in 2 hours and the managers were very pleased! But we did not stop there. Knowing the router speed is based on number of vertices the tool has to evaluate we built abstract cells, but smarter than the digital libraries. They only had routing layers on top modified to let only potential routing areas free and having minimum vertices per polygon. We merged all metals where routing was not available. You can see this concept explained in my book. At step 2 in the new release of the “flow” the script was using the abstract library in CCT and coming back to IC Station the reference points were replaced with the real layout. We got down from 2 hours to 20 minutes…

I want to highlight 2 important factors in this success:

The management believed in our ideas and capacity to deliver. They invested the money for a “bleeding edge tool” and allowed Andrew to be out of production for 4 months.

I was lucky to have Andrew in my team. I was just the enabler and the instigator. He wrote, implemented and released C.A.R.IN.A. alone!

Remember that we did this 2 years before Cadence succeeded to even integrate them in Virtuoso environment. The new Virtuoso Custom Placer (VCP – Dev Place) and Virtuoso Custom Router (VCR – IC Craftsman) was used to build the ACPD flow in a unified environment. How is this for pioneering?