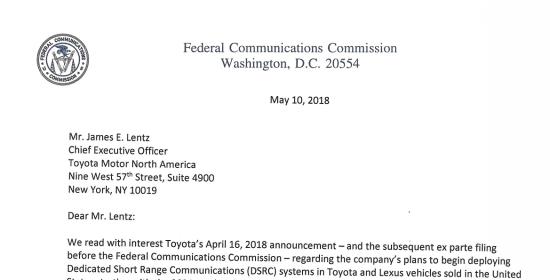 Toyota Motor North America CEO James Lentz got a letter from the U.S. Federal Communications Commission (FCC) last week recognizing Toyota’s announced plan to deploy Dedicated Short Range Communications (DSRC) technology on Toyota and Lexus vehicles sold in the U.S. beginning with MY21. The extraordinary letter notes that Toyota’s decision comes 20 years after the FCC allocated spectrum for DSRC technology, but cautions that Toyota ought to weigh such significant capital investments against the emergence of superior competing solutions, most notably cellular-based C-V2X.

To my eyes the suggestion in the letter is that Toyota’s announcement may be 20 years too late. Judge for yourself: https://tinyurl.com/ybrwl7kd <- FCC letter to Toyota

t isn’t often that the FCC takes an interest in the wireless machinations of the automotive industry. For that reason alone the FCC letter to Toyota is noteworthy. Its real importance, though, lies in the assertion of the FCC’s role in vehicle safety as it relates to wireless technology.

In fact, this assertion of a new role for the FCC vis-à-vis the automotive industry seems long overdue. Automobiles have long been major emitters and receivers of wireless communications. It was perhaps inevitable that the FCC would be dragged into this enhanced role since the agency serves as the arbiter of all things wireless.

The letter can be seen as something of a shot across the bow of the automotive industry. In essence, the FCC is putting Toyota on notice that the agency has completed Phase I of a three-phase testing protocol of unlicensed use of the wireless spectrum originally allocated to DSRC. In this context, the FCC is indicating, Toyota would do well to take heed before committing further resources.

The FCC further notes its alignment and cooperation with the U.S. Department of Transportation and its National Highway Traffic Safety Administration, the National Telecommunications and Information Commission, and representatives of the automotive and communications industries generally. The letter leaves little doubt in the mind of the reader that the future of inter-vehicle communications and V2X technology rests with the FCC and its concerns for “the best interests of the American people.”

The letter also highlights a sad fact regarding Toyota. The Japan-based auto maker has long lagged competitors in adopting embedded wireless connectivity in its cars. Only in recent years has the company begun building modems into its vehicles with any enthusiasm. At the same time, though, the company has added DSRC technology to 100,000 of its cars in Japan.

Given Toyota’s laggard status in connectivity it is odd that the company is embracing DSRC for its U.S. vehicles given the lack of supporting infrastructure, the range of security concerns and unresolved performance issues and particularly in the context of emerging cellular technologies in the form of C-V2X and, within a couple of years, 5G.

C-V2X tests are now underway on multiple continents with early results universally indicating superior performance relative to existing DSRC technology. But, really, the most notable aspect of all is that the leadership of the FCC would see fit to give Toyota a heads up that a wiser path forward for V2V technology deployment might be to wait until the FCC has completed its testing and made a final statement regarding unlicensed use of the spectrum allocated for DSRC.

Even C-V2X deployments and approvals have been held up by the FCC’s testing. The letter stops short of suggesting that Toyota is being irresponsible in announcing its DSRC plan – but the inference is unavoidable.

What is clear is that Toyota gains little from its DSRC announcement. General Motors learned this the hard way several years ago when it announced its plan to add DSRC to the Cadillac CTS. As one sad, sorry GM executive remarked in a panel discussion in Washington, DC a few months ago at a conference on vehicle safety: “We thought the industry would follow us.”

Not only did the industry not follow GM’s “lead” in deploying DSRC, GM itself failed to follow-up the deployment with wider installation of DSRC across its product line. It is clear that DSRC technology is in a jam with its future in the U.S. in the hands of the FCC.

The FCC says it is committed to fostering vehicle safety, but it is fair to note that the FCC takes a bigger picture perspective on the “talking cars” debate. It’s too early to handicap the outcome of the FCC’s testing, but it’s not too early to conclude that Toyota is over-committed to an unproven, unfunded technology. Let’s hope Mr. Lentz “gets the message” from the FCC and avoids wasteful and pointless capital investments.