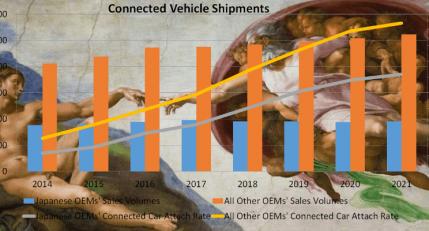 ﻿Japan has had an incredible run in technology, but the past decade has seen a reversal of fortune. Consumer electronics powerhouses such as Pioneer, Panasonic, Sharp and many others have been humbled by the commoditization of their hardware and a shift in market share to Asian competitors.
Japanese manufacturers once dominated the wireless handset market. Now Apple and Google and their partners and suppliers throughout Asia rule the industry.

Japan was not alone. Blackberry and Nokia too felt the sting of a too-slow response to changing market fortunes and consumer preferences. In spite of that business decline and the wind down of Japan’s leadership in consumer electronics, the nation could always proudly point to the automotive industry – especially today with Renault-Nissan and Toyota topping the global industry market share charts.

In fact, many former consumer electronics heavyweights have turned to the automotive industry for growth opportunities to rebuild. But that gambit may be fading fast without urgent action. The same forces of commoditization that undermined Japan’s consumer electronics industry are at work in the auto industry.

It’s easy to see how this state of affairs came to pass. Car makers based in Japan have historically manufactured highly reliable and reasonably priced vehicles with some of the lowest estimated cost of ownership in the industry. Toyota, in fact, is the leader in low cost of ownership.

Producing reliably and reasonably priced cars has meant that buyers of cars from Japanese auto makers have seen no need for vehicle connectivity and the car makers themselves saw no need to add the cost of connectivity to their vehicles. This strategy has served these car makers well as Toyota and Renault-Nissan have risen to the top of global industry sales charts and Toyota and Lexus were recognized, just last week, as tops in reliability by Consumer Reports.

This apparent success can be deceptive. Toyota’s leadership in reliability partially reflects the company’s risk averse nature. Car companies that are taking chances on new technologies and innovating are much more likely to run into reliability issues in Consumer Reports surveys – while also getting dinged by J.D. Power & Associates initial quality assessments. There is, sadly, an inverse relationship between innovation leadership and reliability and quality ratings.

It’s worth noting that both Blackberry and Nokia saw market share gains in the early days of Apple’s entry into the smartphone market. We all know what happened next. Today, Nokia and Blackberry refugees populate auto maker and auto supplier development teams across the globe – daily sharing their tales of burning platforms.

Key to success in connecting cars will be creating platforms based on inter-vehicle networks – initially within OEM brands, but ultimately across all brands. Car companies that lack connectivity are utterly unable to participate in this value creating proposition.

So Toyota’s success in reliability reflects, in part, the company’s timid approach to connectivity and experimentation with new technology. Vehicle connectivity, in particular, is an area fraught with technical challenges and potential sources of failure. Japanese car makers have perhaps avoided most of the early pitfalls of connecting cars, but in the process have opened up a negative technological gap with competing car makers elsewhere in the world. The short-term success likely is blinding these companies to what they have lost by neglecting connectivity.

The chart (above) shows the gap growing in spite of announced plans by Japanese car makers to add connectivity to most or all of their cars. Change comes slowly in the automotive industry and competitors such as General Motors, Ford, Volkswagen, Volvo, BMW, Daimler, PSA and more have the advantage of having already committed to connecting all of their cars putting many miles of hard earned experience between themselves and their Japanese rivals.

Can Japan Inc. wake up and catch up? Is there a ray of sunshine potentially illuminating the land of the rising sun?

It just so happens that Japan is preparing to step up in the wireless industry with one of the first deployments of 5G technology in preparation for the 2020 Olympics. If all goes as planned connected cars and autonomous vehicles will have a prominent role to play in the staging of this international event – not unlike what occurred at the Beijing Olympics.

Japan Inc. is on the brink. The automotive industry in Japan is facing the challenge of catching up with the rest of the industry while actually leading the industry in vehicle sales. Given the recent history of declining fortunes in high tech industries on the island nation there is little doubt that leaders both inside and outside the automotive industry recognize the importance of preventing this platform fire before it breaks out by tamping down the embers of over-confidence.

4 Replies to “Japan Inc. on the Brink”