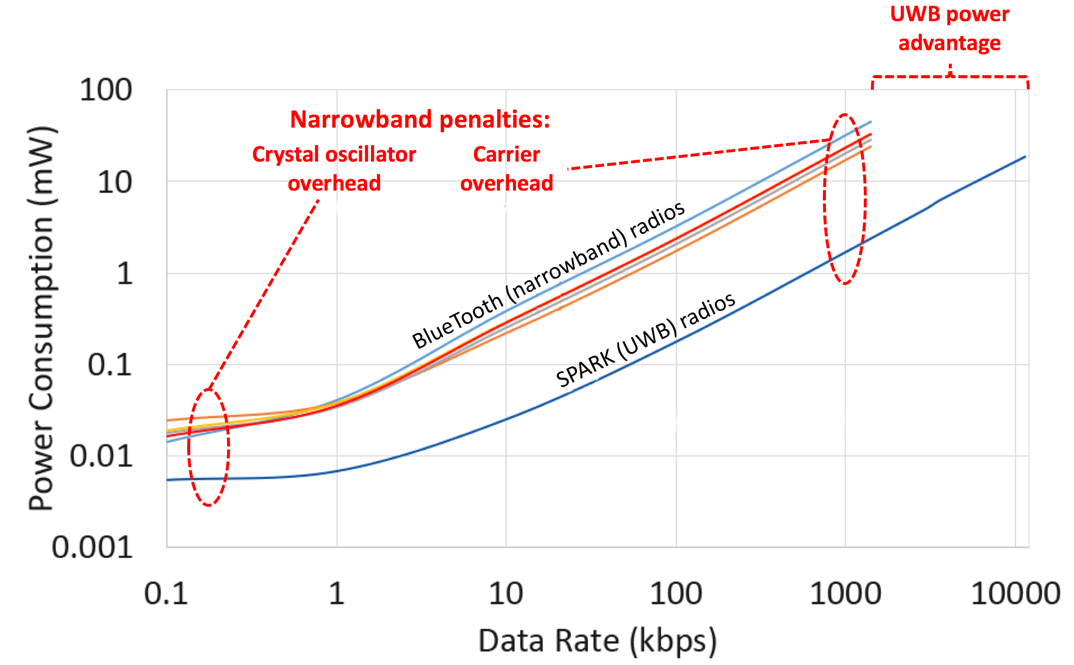 How can ultra-wideband done right do more with less energy

Power reduction has been driving the development wireless chips over the last 15 years. After years of development, BLE was ratified in 2006 to address the power consumption of Bluetooth. More recently, Bluetooth 5.2 added features to reduce consumption for different applications, including audio. However, these modifications are mostly incremental. Fundamentally, the reduction in power consumption is physically limited by the architecture; a carrier-based transceiver will always require a significant amount of power to start, stabilize and maintain its RF oscillator. After two decades of optimization, Bluetooth has reached its point of diminishing return. This is true for all narrowband technologies: gaining an order of magnitude requires a new paradigm in wireless transmission. Here’s why:

The Narrowband Penalty
In the chart above, you can see the two significant power penalties inherent in all narrowband radio architectures like Bluetooth:

How UWB Avoids the Narrowband Penalties
If you start with a blank page to design a short range (50-100m) wireless protocol that minimizes power consumption and latency and maximizes data rate, you would probably go through this thought process:

As you can see from data on the previous graph, that approach delivers the lowest possible power profile for short range communications. This is the approach SPARK Microsystems has taken for its UWB transceivers.

UWB’s Advantages
Because UWB does not use a high-frequency carrier oscillator, UWB transceivers can be turned on very quickly and transmit a far higher data rate than a narrowband radio for a given power level. This, coupled with the low latency described in Part 4, makes UWB an ideal solution for the next generation of low-power wireless applications.

Why did Narrowband Prevail in the 1920’s?
Although ships were required to install spark gap radios after the Titanic disaster, as discussed in part 1, wideband technology of the time had two major drawbacks:

By the 1920’s, vacuum tube technology and superheterodyne circuits enabled narrowband radios to take over rapidly escalating demand for voice and other communications.

In the final part of this series, we will summarize how military and commercial technology developments, along with worldwide spectrum allocations, have created a unique opportunity for UWB to dominate short range communications in the 2020’s and beyond.