In college I took courses in physics, calculus, chemistry and electronics on my way to earn a BSEE degree, then did an 8 year stint as a circuit designer, working at the transistor level and interacting with fab and test engineers. My next adventure was working at EDA companies in a variety of roles. As a circuit designer I knew that we had software tools like SPICE to help us simulate the timing, power, currents and detailed operation of transistor devices, cells, blocks and modules. What I’ve come to learn about is that device technology engineers also need software tools to help them simulate electrical, chemical, optical and thermal behavior of semiconductor devices. Silvaco recently held a webinar on Wednesday, so I attended to learn about TCAD Simulation of Ion Transport and Electrochemistry.

I felt pretty comfortable as an EE to hear familiar terms like electrons, holes and ions, but chemical species was a new term for me. There are at least four major applications where knowing what is happening at the electrochemical level is mandatory:

Silicon, Germanium, Gallium and Arsenide materials are all examples of a chemical species. Equations have been derived that define how chemical species behave, and that forms the basis for apply software like the Silvaco simulator called Victory Device: 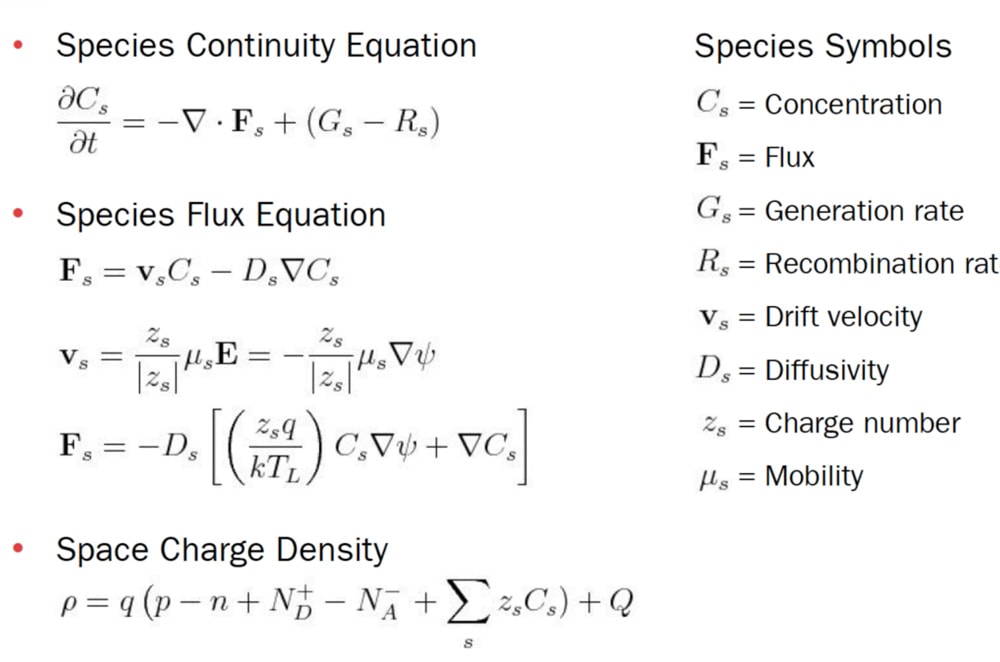 When using the Victory Device tool you first define the materials (species) and then the type of reaction you want to simulate. For example if you wanted to model and simulate the compound semiconductor made up of Indium, Gallium and Zinc (InGaZn) using Victory device then it’s only a few lines of coding, shown below in colored letters: 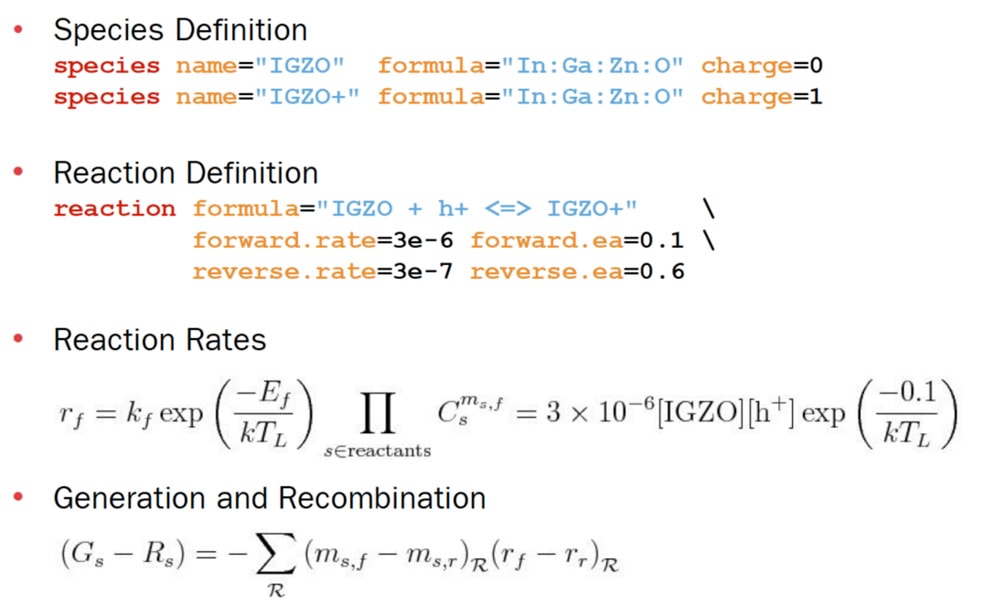 With this device simulator you can define as many species as needed, and you get to define the names of the species in terms that are self-documenting. Doping levels are also defined, along with the interface between species, so here’s another example using two chemical species: Silicon (Si) and Hydrogen (H).

For our example of SiH we also define properties like diffusivity and the maximum species concentration, with units of atoms/cm^3 :

Silicon is a fixed species, meaning that the diffusivity is zero, however Hydrogen has a non-zero diffusivity and is transportable. Here’s a Lewis diagram showing Hydrogen on the left and Si plus SiH on the right: 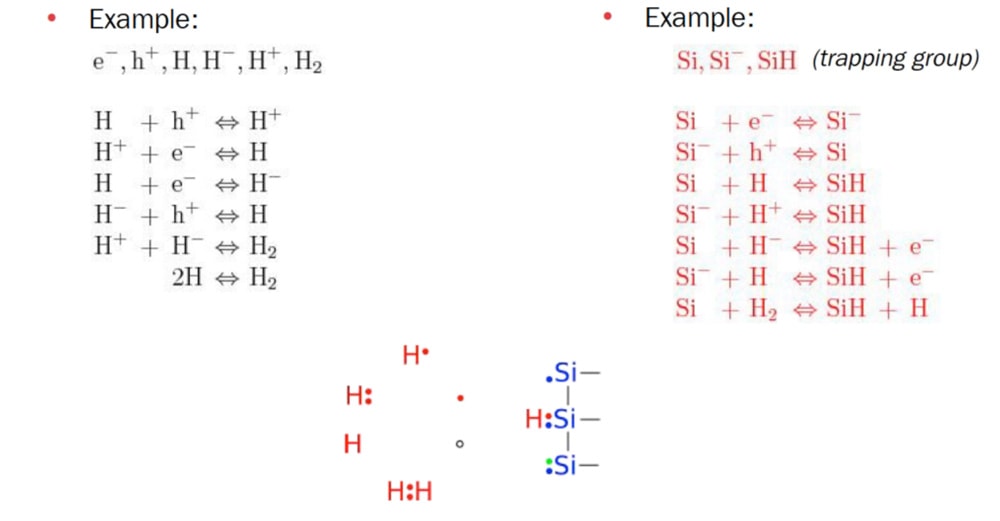 Mobile species can hit a boundary and be blocked, so that there’s no transport. In Victory Device you define at what concentration level a species may transport, here’s an example with Hydrogen using a fixed concentration amount:

To model and simulate the passivated interface degradation with the SiH material it takes just 16 lines of code in Victory Device: 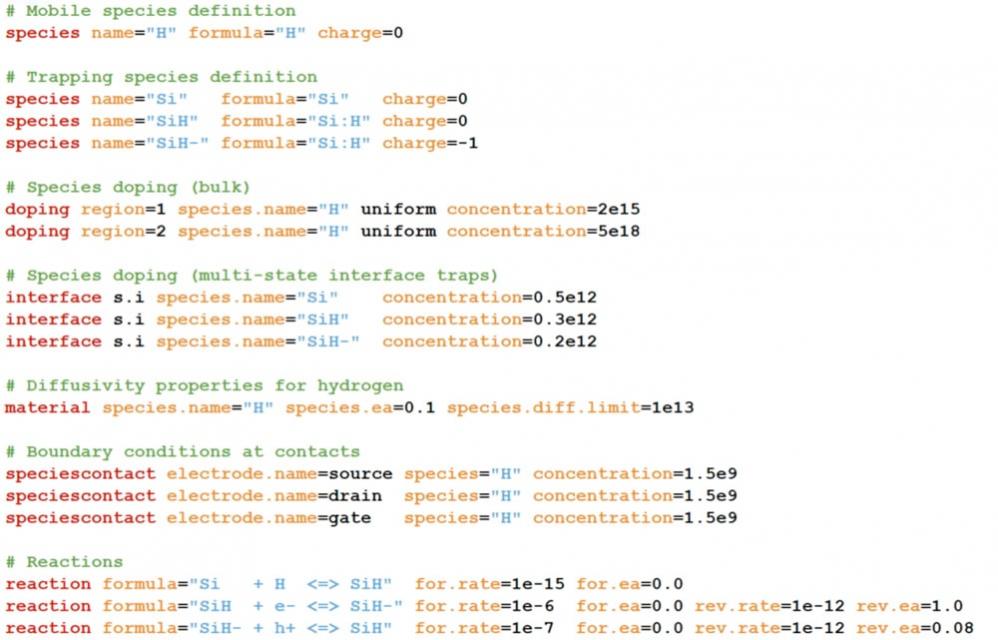 The results of simulation can be viewed in a couple of ways, wither a structured file output or a log file output. The final example from the webinar was showing Victory Device was used for predicting the negative bias stress simulation with illumination in a TFT made up of Indium, Gallium, Zinc and Oxide. Simulation results correlated well with published data, this graph shows the Vt shift by NBIS for a 20nm IGZO TFT device where red curves are measured results and blue is from simulation: 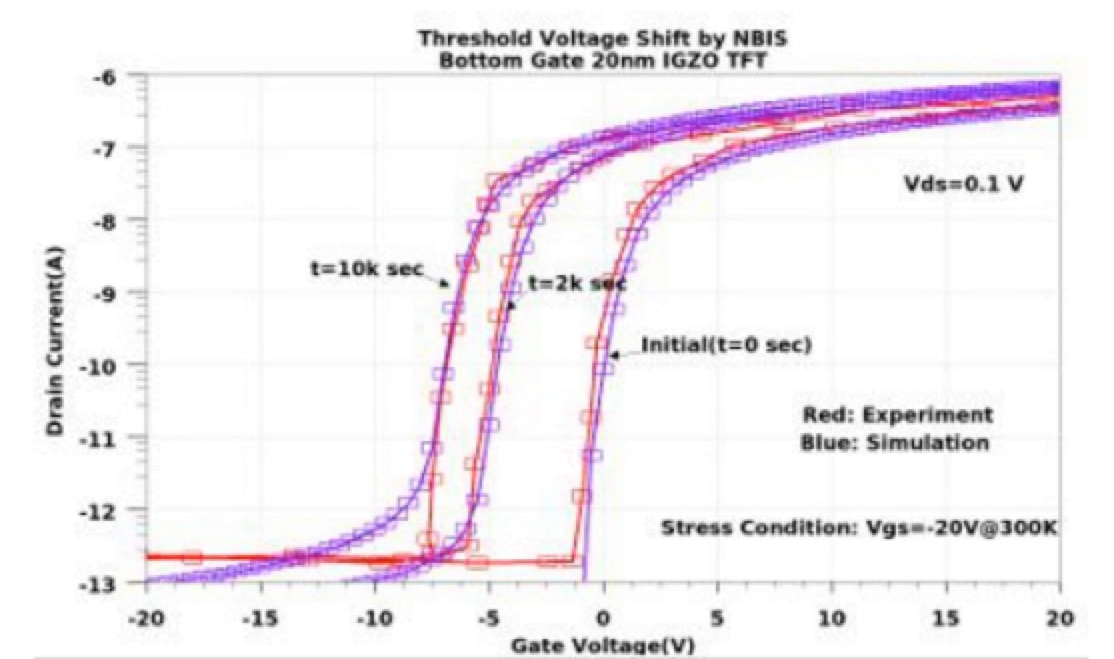 With device simulation there are always more demands, so the engineers at Silvaco are adding new abilities to their road map for Victory Device, like:

Summary
In the old days the device technology engineer would make many physical experiments, wait for the wafers to get through the line, then make measures to decide if more iterations were required before reaching a stable process. With the advent of TCAD tools like Victory Device we can now perform many device simulations in a virtual world based on the laws of physics and chemistry, thus shortening time to market and creating a more reliable semiconductor process.

To replay the entire 45 minute webinar you may register online now.

2 Replies to “Using a TCAD Tool to simulate Electrochemistry”