Register / Log In
Guests have limited access.
Join our community today!
You are currently viewing SemiWiki as a guest which gives you limited access to the site. To view blog comments and experience other SemiWiki features you must be a registered member. Registration is fast, simple, and absolutely free so please, join our community today!
Can it ever be game over in tech?
by Don Dingee on 09-12-2016 at 4:00 pm
View Profile
View Forum Posts

The personal computing market started out back in the late 1970’s, with IBM being a relative late-comer in 1981, however over many decades we’ve seen the unit volumes steadily increasing each year driving demand of semiconductors of all types. IC Insights is a research company that follows the personal computer … Read More

Where have all the semiconductor drivers gone?
by Bill Jewell on 11-24-2014 at 11:30 pm
View Profile
View Forum Posts

Tablets and smartphones have been key drivers of electronics and semiconductor growth for the last few years. However the growth rates for these devices are slowing as they have become more prevalent. Tablet shipments are expected to reach 229 million units in 2014, according to Gartner, equal to 73% of PC units. IDC projects smartphones… Read More

It was CES 2011 when Steve Ballmer sweatered up and pitched the coming universe according to Microsoft, where the same Windows base would run on everything – PC, phone, tablet, and game console. Getting from that visionary statement to Windows 10 hasn’t been a smooth ride.… Read More 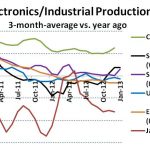 Worldwide electronics bounced back strongly in 2010 after the recession of 2008-2009. Every region experienced solid growth, ranging from high single-digit growth in the U.S. to over 20% in the key Asian countries. However in the last two years electronics has slowed down significantly. Several factors contributed to this … Read More

The Semiconductor Landscape In A Few Years?
by Daniel Nenni on 01-25-2012 at 9:48 am
View Profile
View Forum Posts 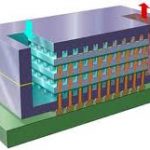 Looking at the huge gap between the revenue of semiconductor design and manufacturing (~$300B) and that of EDA tools, services and silicon IP combined (~6B) inspired me to look more deeply into the overall arena of semiconductors in today’s context and possibly decipher some trends which should emerge in near future. Although… Read More

Tablets are hot items these days. There is exuberance about the speed of application processors, size of the internal memory, capabilities of the operating systems, WiFi or 3G/4G connectivity, quality of the display, cameras megapixels, battery life, tablet weight, etc. All of these features are very important, no question… Read More