I was scheduled to attend the Mentor tutorial at DVCon this year. Then coronavirus hit, two big sponsors dropped out and the schedule was shortened to three days. Mentor’s tutorial had to be moved to Wednesday and, as luck would have it, I already had commitments on that day. Mentor kindly sent me the slides and audio from the meeting… Read More 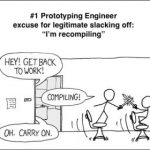