While listening to the Intel and AMD conference calls last week I was reminded of the ATI acquisition by AMD and the painfully long cultural assimilation that ensued. The title of this blog could just as easily have been “Custom vs Synthesizable Design Cultures” or “The Real Reason Why AMD is Fabless” because that is closer to how … Read More

I was in a Twitter conversation over the weekend with some very smart people, and one of the discussion points was how slow and painful the formal standardization process can be. One suggestion was that IoT companies should “just do it”, creating specification-by-implementation. … Read More

Words often have much deeper meaning than first meets the ear. The story behind a lyric, or a name, reveals origins, philosophical themes, and ideas beyond the obvious. A new effort from Intel conjures up just such an example – a deep reference to makers everywhere.

In a familiar refrain from Queen “Bohemian Rhapsody,” we hear two… Read More 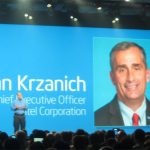 At IDF Brian Krzanich gave the keynote. I won’t summarize the whole thing here but just talk about one part that was something they had actually managed to keep secret ahead of time: Quark.

Quark is a synthesizable core. It uses 1/10th power of Atom and is 1/5 size. Now I am writing this, I don’t know if this is a fair comparison… Read More