I remember a couple of decades ago, my father used to go to a nearby doctor’s clinic to get his blood pressure and sugar levels checked. I guess, in around 1990s small electronic kits became available to measure these usual daily health indicators and instantly display the numbers. I bought a few for my father then. Today, the scene… Read More

In my last blog here, I talked about last 30+ years of semiconductor IC market. While we have seen this market growing at CAGR of ~9% over last 30+ years, the CAGR of current decade is expected to be at just ~4%. Although the base size of the overall semiconductor IC market is quite healthy, expected to be at ~$378B by 2019, we cannot hope… Read More 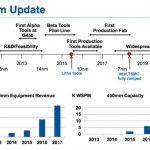 TSMC is a more profitable semiconductor company than Intel
by Daniel Nenni on 08-07-2013 at 9:00 pm
View Profile
View Forum Posts 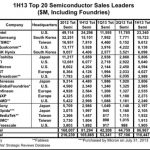 There is an interesting article on Seeking Alpha, “A More Profitable Semiconductor Company Than Intel”, and for a change the author does not PRETEND to know semiconductor technology. Refreshing! Personally I think the stock market is a racket where insiders profit at the expense of the masses. But if you are going to gamble you … Read More