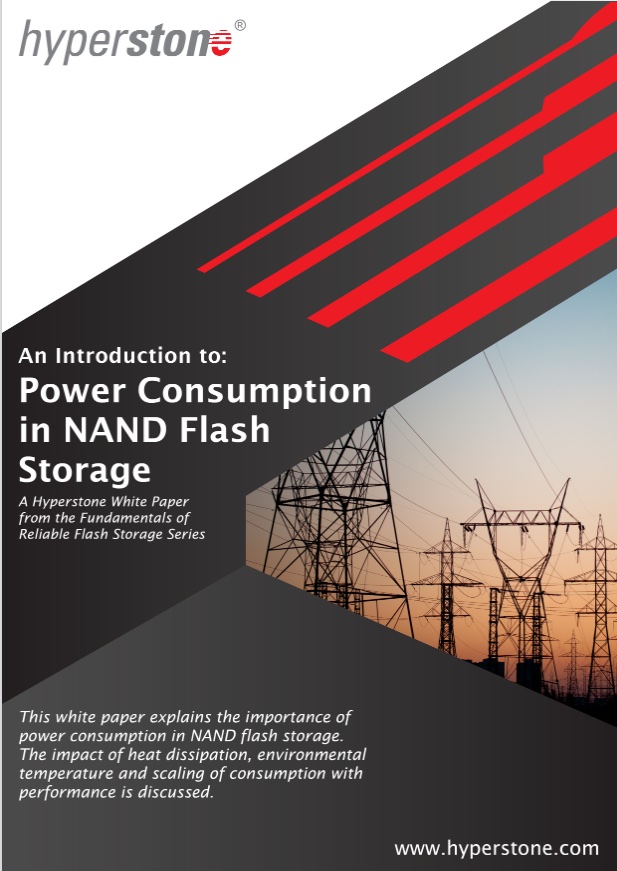 Even though we all know that reducing power consumption in NAND Flash Storage is a good idea, it is worthwhile to take a deeper dive into the underlying reasons for this. A white paper by Hyperstone, a leading developer of Flash controllers, discusses these topics providing useful insight into the problem and its solutions. The paper is titled “Power Consumption in NAND Flash Storage.”

It almost goes without saying that the most obvious reason to reduce NAND flash storage is to reduce operating costs – lower power means lower utility bills. Furthermore, lower power can also mean packaging and cooling system savings which will reduce end product costs. Along with that there are several other equally important reasons.

Regarding the key issues for NAND flash devices, the Hyperstone white paper mentions thermal stress. Increasing complexity and higher performance translate into more thermal stress for semiconductors. The problem is especially aggravated when devices are located in industrial or automotive settings where heat is already an issue. One property of semiconductors that works to our disadvantage is when they operate at higher temperatures, they use more power – creating a positive feedback loop. The white paper points out that a temperature rise from 50C to 100C leads to a ten-fold increase in leakage current. Thermal stress can lead to multiple kinds of failures such as device breakdown, electromigration and physical fatigue.

Leakage current, an important issue for NAND flash devices, is static current that flows through devices when they are not active. Unfortunately, the percentage of chip power consumption from leakage is growing as chips move to smaller more advanced process nodes. Additionally, there is a tradeoff between performance and leakage power. Lower threshold transistors, which have more leakage, are necessary for higher performance. The Hyperstone paper describes some specialized techniques for applying bias voltages to transistors to vary their leakage current as needed based on time-dependent performance requirements.

Within the NAND flash controller, the different functional elements have their own power requirements which can change depending on workloads and operational modes. The white paper does a good job of delineating the major functional blocks that can affect power consumption. Likewise, the NAND flash itself requires different levels of power for different operations. These are also dependent on whether it is single level charge (SLC) or multi-level charge (MLC).

The Hyperstone white paper describes the power implications of operational modes for the host interface over PCIe, and also discusses the power characteristics of DRAM which is often used for cache purposes. Error correction can play a hard to predict role in power usage. Encoding error correction information is not compute intensive. However, when there are errors, especially multiple errors extensive computation can be involved. This can drive up power consumption.

As a result, getting objective power measurements under different workloads and operating speeds can be tricky. Benchmarking power consumption is required to make realistic determination of low power performance. All of the above factors and more come into play. Many decisions in the total system design influence the result. DC to DC power converters need to be properly selected to handle transitions from modes to active modes. Interfaces should fully support low power modes. Controller chips and their ancillary chips needs to include advanced and complex power saving features, such as clock gating and power gating. Hyperstone includes information about their use of CystalDiskMark for benchmarking SSDs with Hyperstone flash memory controllers. They even include several graphs of power performance over long intervals that show their relative performance versus a competitor.

Because power consumption is such an important consideration for SSDs, it is good to get a deeper insight into its sources and solutions. Hyperstone does a good job of covering all of this in their white paper. You can download the white paper and other relevant Flash Storage white papers on the website of Hyperstone.