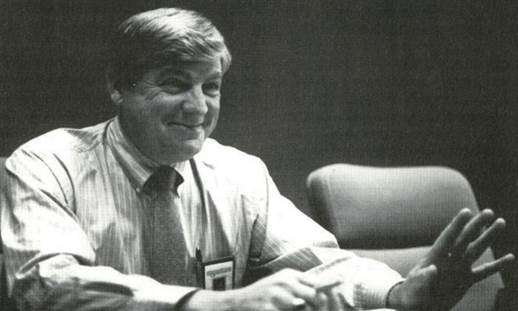 This is an interesting piece of TSMC history. From 1987 to 1988 James E. Dykes served as the first President and Chief Executive Officer of Taiwan Semiconductor Manufacturing Company Ltd.

Held at the Pointe at South Mountain.
Phoenix, Arizona
Monday, May 2, 1988

As Jack said, I’m here to talk about the Taiwan semiconductor outlook.

That outlook is, in a word, great.

The Economist Magazine, in its March 5 issue, called Taiwan and its nearly 20 million people “The most dynamic country in east Asia.” And it’s all true. The country is going through a rare and rapid period of enlightenment.

Politically, martial law has been lifted, newspaper censorship and control have been revised, and new political reforms are expected to continue under President Lee Teng-hui, who took office in January after the death of President Chiang Ching-kuo.

Economically, productivity is rising at a record rate. In 1952, for example, per capita GNP was $48. Today it’s more than $5,000 and next year, it’s projected to be more than $6,000. In response to U.S. trade pressures, import tariffs across a whole range of goods are being sharply reduced. And Taiwan’s foreign exchange reserves exceed $75 billion, the world’s third largest after Japan and west Germany. All this in a country with few natural resources.

Yet to really understand the impact Taiwan will have on the semiconductor industry, you have to know why the country is in transition. For a variety of reasons, Taiwanese manufacturers are heading upmarket across a whole range of industries and leaving behind their image as manufacturers of cheap, shoddy, or imitation goods.

Korea and Taiwan are often mentioned as exhibiting the same trends, but the driving forces are quite different. Korea is dominated by large, vertically integrated companies, the chaebol, with massive government investment and direction for strategic industries.

Taiwan, by comparison, is more like Silicon Valley. You find in Taiwan the same entrepreneurial spirit the same willingness to trade hard work for business success and the opportunities to make it happen, that you find in Santa Clara County, and here in the Valley of the Sun. Even Taiwan’s version of Wall Street will seem familiar to many of you. There’s a red-hot stock market where an entrepreneur can take a company public and become rich overnight.

The Taiwanese people are hard-working and well-educated. One in every four is a student and the literacy rate is 91%. Society as a whole is stable and is becoming more affluent, the average family income last year of over $18,000 is projected to rise to more than $40,000 in the early 1990s. Yet the nation’s wealth is distributed fairly equitably, with the wealthiest 20% of households having an income less than five times that of the poorest 20%.

The society is becoming more cosmopolitan. Three-quarters of the population now live in urban areas and agriculture as a percentage of gross domestic product has dropped from about one-third in 1952 to about than one-twentieth today.

During the same time period, the percentage of industrial output more than doubled and now accounts for about half of GDP.

Taiwan, as a whole, has a GNP of about $98 billion, but the more telling economic statistics have to do with the volume and type of foreign trade. Because the country’s economic growth has been fueled largely by exports and Taiwan now faces a different set of export conditions.

As I said earlier, Taiwan has foreign exchange reserves of more than $75 billion. But it has a foreign debt of only about $3 billion. And as you know, Taiwan’s rising trade surplus has brought U.S. protests. including a decision by the U.S. administration to remove Taiwan from the generalized system of preferences program, which exempts selected countries and product categories from U.S. import tariffs.

In response to the overall trade situation, Taiwan has acted in a number of areas, reducing its own import tariffs on a range of products, widening its market to foreign goods and services and spending more on capital-intensive domestic public-works projects. Even boating and coastal fishing are being opened and targeted as tourist attractions.

Currency exchange rates are also changing the nature of many Taiwanese enterprises. Over the last few years, the Taiwan dollar has appreciated dramatically against the U.S. dollar, nearly 20% in 1987 alone. Clearly, Taiwan is losing its edge as a source of low-cost labor.

The government is actively encouraging Taiwanese companies to look for more domestic markets, to find export opportunities in countries other than the U.S., to move upmarket, to products of greater sophistication with greater added-value and competitive worth and to increase R&D expenses.

The electronics industry accounted for 4.2% of Taiwan’s GNP last year and 20% of the value of exports. Planners talk about raising the proportion of such technology-intensive industries from the current 24% to 35% of the manufacturing sector by next year.

You can look at semiconductors as a microcosm of this overall trend.

While the Taiwanese have historically served the labor-intensive test and assembly segments, they are moving upmarket into silicon integrated circuit production. The value of ICs shipped from 1979 to 1985 grew by almost 195%, from $133 million to $391 million.

The value of transistor shipments grew by an impressive but smaller 111%, while growth in the value of low-technology diodes and capacitors remained virtually flat in the same time period.

The major chip end-users in Taiwan are manufacturers of personal computers and associated products and consumer electronics equipment chiefly VCRs and TVs. Broken down by segment, the personal computer area will show 22.3% compound annual growth in the next five years, followed by the VCR segment at 11%, and TV production at about 8.5%.

Two trends here underscore the move upmarket from test and assembly activities: one, the Japanese are moving production of high-performance consumer electronics to Taiwan, and two, the government is encouraging Taiwanese companies to develop their own manufacturing skills in products with high growth potential: CDs, digital TV, digital audio tape.

The semiconductor industry in Taiwan is beginning to blossom. It’s interesting to note that although Taiwan’s growth as a semiconductor supplier was fueled largely by foreign firms until the early 1980s. The island’s first semiconductor factory for transistors was started in 1963 by a native Chinese with technology developed at Cheng Kung University.

Following that, of course, there was a virtual explosion of discretes production, beginning with general instrument, which established a facility for germanium transistors in 1965. That was soon followed by investments in assembly facilities by Texas Instruments and American Microsystems, and later by a host of others.

By 1984, there were 57 companies and organizations in semiconductors, 13 of them in ICs, and 44 in discretes and optoelectronics.

The Hsinchu Science Park, where we are based, is home to an increasing critical mass of semiconductor companies alongside other firms engaged in electronics design and production, there are about 70 high-technology companies located there today. The concept is to have semiconductor producers and customers in the same industrial complex.

Let me describe the IC-related firms in Taiwan. Besides ERSO, the governmental electronic research service organization, there are eight firms with wafer and/or IC manufacturing capability. They are TSMC, United Microelectronics Corporation, or UMC, Vitelic, Mosel, Quasel, Hualon, Winbond, and UTIC.

Taiwan has a combined capability to produce 61,000 4-inch wafers per month now.

But with already announced expansion plans, by 1990 Taiwanese producers will have the additional monthly capability for 80,000 6-inch wafers and 35,000 5-inch wafers.

There are more than 40 new design houses, like STK, Holtek, and Silicon Integrated Systems. ERSO serves as a photomask supplier and a new mask shop is now being incorporated. It’s called Taiwan Mask Corporation and it will consist of the ERSO facilities now being used plus new investment in the science park for additional e-beam mask-making capability.

And of course, there are more than 30 assembly and test facilities on the island, TI, Philips, General Instrument, GE Solid State, and so on.

However, much work remains to be done for this to happen. If Taiwan is to achieve its IC goals in the next five years, it must develop an infrastructure adequate to serve local industry needs. The most pressing need is for a locally based network of material, equipment and service suppliers to support the growth of the industry.

Let me give you a sense of that projected growth. Winbond is a maker of ICs for the personal computer, telecommunications, and consumer electronics industries. It now has sales of less than $35 million but plans to be a $100 million company by 1991 with 300 employees instead of its current 110.

It is building a class 10 wafer fab in the Science Park, with a capacity of 15,000 5-inch wafers per month. The fab will run 2-micron CMOS and NMOS processes and will be ready in September. A second fab is under serious consideration for operation in 1992.

UMC is building a new 6-inch fab to add capacity of 30,000 6-inch wafers per month. The company expects to spend about $140 million over the next three years for capacity additions.

TSMC is building a new manufacturing facility in the Science Park, with a capacity for 30,000 6-inch CMOS wafers per month, although a portion is convertible to 8-inch. The entire facility is designed for sub-micron geometries, but initial production will center on 1.2-micron feature sizes. It is geared toward turnkey production, from reticle generation to assembly and final test… And we expect it to be operational by the end of next year.

As you can see, Taiwan is growing and maturing. It is becoming a more respected competitor in the world’s economy and is leaving behind its heritage of disrespect for intellectual property rights.

There are risks and rewards for technology companies who wish to ally themselves with the most dynamic country in east Asia. The risks generally have to do with issues of technology development and availability.

The rewards generally have to do with what you might expect from dealing with a proud, talented, and hard-working people. Quality products at competitive prices and long-term, mutually beneficial relationships.

Thank you very much.

6 Replies to “Taiwan Semiconductor Outlook May 1988”