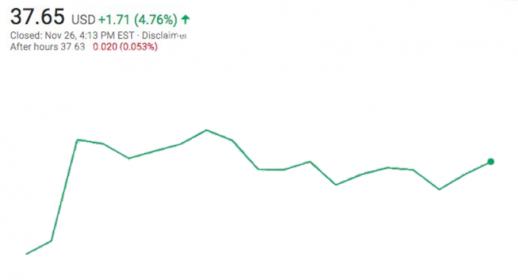 General Motors CEO Mary Barra is known for a number of quotes one of which is: “My father was a die maker for 39 years, so I had a basic understanding of the automobile industry and what the manufacturing world was like, just from the opportunity to spend time with him, just talking, because he was a car buff.” One has to wonder what Mary’s dad would have so say about the latest news out of GM.

The catastrophic climate report was notable for its release occurring on a Friday in the middle of a holiday. Journalists commented that the decision was clearly taken by the Trump administration to dump the report on a Friday to ensure that it received as little attention as possible.

In contrast, the GM announcement came on the Monday following the holiday weekend and preceding the L.A. Auto Show guaranteeing widespread press attention and analysis. The decision was clearly a calculated one as GM’s stock price rose nearly 5% on the news, as investors rewarded GM’s apparent fiscal prudence.

Unfortunately, the decision to release the announcement on Monday also revealed GM’s priorities. In spite of anything GM’s leadership might have to say about its employees or its customers, the top priority is clearly investors.

In spite of GM’s best efforts, though, the stock hasn’t budged much from its IPO price. The latest bump, like those that have preceded it, will rapidly fade and fall.

GM’s massive market retreat has been underway since the government bailout and bankruptcy approximately 10 years ago. At that time GM, along with Chrysler, used the opportunity of bankruptcy to justify the termination of 3,389 dealers.

Terminating dealers seems like a counter-intuitive strategy for a company planning to emerge from bankruptcy and needing to sell more cars. But as Tammy Darvish, author of “Outraged,” describes it, the move was clearly intended to reduce inter-dealer competition and goose profit margins.

GM has continued to pursue higher vehicle prices and profits by dialing back on incentives. It remains unclear as to precisely how sustainable that strategy will be. GM’s profit-driven market manipulations have plunged the company to fifth place globally based on vehicle production – well behind Hyundai and slightly ahead of Ford.

The pursuit of profit has contributed to decisions to close plants in Australia, Indonesia, India and Russia while pulling out of the European market by selling Opel to PSA. Other market exits included India, South Africa, and Russia.

The company has also bought back $10B in stock since 2015. Investors have questioned the purpose or wisdom of these buybacks – normally done to increase the stock price – since the stock has shown little movement.

Meanwhile GM has been sinking hundreds of millions of dollars into Cruise Automation and launching the Maven car sharing service. The company line on this mix of exits and investments is that GM is investing in the future, preparing for a shared, autonomous, electric vehicle future.

But it is difficult for the company to escape the logic that its strategy of focusing on profitable operations and cutting off unprofitable ones directly contradicts its investment strategy of pouring money into ventures with uncertain prospects. Both Maven and Cruise are facing mixed results with Maven expansion plans on hold and Cruise failing to meet critical milestones on the path to autonomous operation.

The biggest and most dubious claim of all at GM – and it is one that is shared by Ford Motor Company – is the company’s almost complete exit from the passenger car market – joining FCA and Ford in focusing on SUVs, crossovers and pickup trucks. GM, like its Detroit competitors, blames a lack of consumer interest in passenger cars and a correlated decline in sales.

GM, Ford and FCA make much more money selling SUVs, crossovers and pickups than they do selling cars. So it is logical to want to make more of these large vehicles and less of smaller, passenger vehicles.

This myopic profit-driven strategy is effectively painting the three Detroit OEMs into a marketing corner. A trucks-and-SUVs-only strategy makes all three of these auto makers more vulnerable than ever to imports and domestically manufactured trucks and SUVs from import makes.

Car makers often paint themselves as the sad victims of market forces and lagging demand. The reality is that car makers spend billions of dollars telling consumers what cars they “want” or “need.” Consumer demand is not occurring in a vacuum.

The Volt extended range EV has consistently produced some of the most amazing customer satisfaction scores ever seen by General Motors. Volt evangelists are legion, yet GM has somehow failed to embrace these brand ambassadors and leverage them to build a stronger footing in the EV market.

Now GM is terminating the Volt – or so it seems. Such a move represents an extraordinary destruction of market value comparable only to GM’s sales of Opel to PSA.

It’s not too late for GM to turn in the direction of the skid and get itself back on track. Of course, the Trump administration won’t make that easy with threats of suspending GM’s EV subsidies and slapping tariffs on cars imported from GM factories in China.

It’s time for GM to take a greater interest in its customers, its dealers, and its workers and, for at least a quarter or two, tell Wall Street to take a hike. It’s time to get back to basics – get back to the product.

With the passing of FCA CEO Sergio Marchionne and the ousting of Renault-Nissan-Mitsubishi Chairman Carlos Ghosn the stage is clear for a real game changer, GM’s Mary Barra. It’s time for Barra to take her place as the leading voice of the global automotive industry – an industry that needs a more inspiring vison than the prospect of endless downsizing that has unfolded under her guidance thus far.

Another one of Mary Barra’s noted quotes is: “My definition of ‘innovative’ is providing value to the customer.” Right on, Mary.

3 Replies to “GM: Stop the Downsizing!”