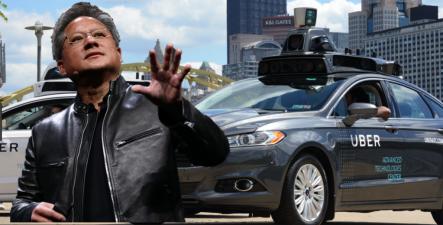 This morning at Nvidia’s AI and Deep Learning Conference, GTC 2018, CEO Jen-Hsun Huang will give a keynote in which he will tout the company’s extraordinary progress in fostering and advancing the cause of artificial intelligence and deep learning along with the correlated autonomous driving industry. Hundreds of companies of all kinds are leveraging Nvidia’s Drive PX platform and technology as part of their efforts to master automated driving.

To hear Nvidia tell it you’d think Nvidia is single handedly enabling automated driving, but of course it takes an eco-system and there are hundreds of established and startup companies and Nvidia competitors contributing to the cause. What you won’t hear in this morning’s keynote is the fact that Nvidia has paused its own autonomous vehicle testing activities in the wake of the fatal crash of an Uber autonomous vehicle in Tempe, Ariz., last week.

The news of the testing pause was revealed on the first day of GTC 2018 yesterday as part of the automotive track at the event – though the announcement was not formal. Nvidia took the step out of respect for the woman who was killed in the fatal crash and out of concern for what the post-crash investigation might find.

The fatal crash in Tempe is evolving into an epic fail for Uber with wide-ranging implications for the broader autonomous vehicle testing industry. Uber is an Nvidia customer. While Nvidia quietly “paused” its own autonomous vehicle testing, executives at Velodyne, a company which provided Lidar laser sensing technology used on the Uber test vehicle, noted that they were cooperating with investigators as part of the effort to determine what went wrong.

The significance of the Uber crash is that it is widely considered to be a failure of either the hardware or the software within the Uber system. Dashcam video from the crash captures the safety driver distracted at the point of impact with the pedestrian while showing the pedestrian located prominently in the middle of the road walking a bicycle laden with bags.

This is a seismic development for suppliers like Nvidia and Velodyne. While it is most likely that Uber’s software is the chief suspect in the incident, it is not possible to immediately exonerate the hardware providers. Uber has done nothing less than make Nvidia and Velodyne accessories to manslaughter.

No amount of regulation or legislation can fix this. Nvidia, and maybe Velodyne, can be expected to review their policies with regard to their developer programs – as will competitors. Nvidia, in particular, goes above and beyond the call of duty in offering hardware and software developer kits and related databases and server resources. There is no doubt that the epic Uber failure will lead to a reassessment of those programs with an eye toward helping partners avoid a repetition of Uber’s fatal event.

Nvidia has no choice but to take steps in the context of the fear, uncertainty and outrage likely to be stimulated by a robot car killing a human being. This is precisely the type of event that is capable of slaying a nascent industry in the crib.

Uber has hereby introduced a substantial coterie of investors to the liability exposure inherent in this form of testing – sending a frisson of fiduciary fright up the spines of investors in competing platforms and systems. This widespread concern arrives even as viewers of the video continue to shake their heads at the failure of the Uber system to perceive the pedestrian – suggesting jaw-dropping incompetence is to blame somewhere along the value chain.

The New York Times reports that Uber’s new CEO, Dara Khosrowshahi, was in the process of re-evaluating or terminating the self-driving car program. Maybe he knew something we all should have known, that the program was fatally flawed.

It is remarkable that it was a well-funded organization like Uber that brought this setback to pass, rather than a tiny startup like Comma.ai or any of the dozens of companies fitting aftermarket kit to normal vehicles. With dozens of autonomous driving platforms competing to solve the automated driving challenge, one can expect widespread efforts within the industry to improve oversight and development tools.

Companies like Nvidia and Velodyne cannot count on regulators and legislators to “figure out” what is needed. Regulators and legislators are more likely to get this one wrong than to propel the industry forward with new understanding. Expect the autonomous vehicle supplier community to step forward and provide enhanced support and guidance to partners. No one wants to be party to the next Uber event – which may well be inevitable.

Given the growing recognition of the importance of autonomous driving simulation there will be growing interest in greater sharing of data and “learnings” from such events as the Tempe crash. The other important takeaway, though, is that fellow Tempe tester, Waymo, which claims billions of miles of simulated driving and more than five million miles of actual on road miles traveled may well be the least inclined to share what it has learned. Uber’s failure amplified for the entire developer community the size of the development delta between Waymo and the rest of the industry. Without help from suppliers like Nvidia, and in the context of weak-kneed investors, that delta is only likely to grow in the wake of Uber’s epic fail.