Register / Log In
Guests have limited access.
Join our community today!
You are currently viewing SemiWiki as a guest which gives you limited access to the site. To view blog comments and experience other SemiWiki features you must be a registered member. Registration is fast, simple, and absolutely free so please, join our community today!
Curie to Bring New Dimensions in Wearables!
by Pawan Fangaria on 01-10-2015 at 7:00 am
View Profile
View Forum Posts

There were two big announcements last week right in my backyard and I missed them both! Instead, I was in Taiwan investigating yet another big development and all three of these events will intersect next year, absolutely.

At IDF in San Francisco Intel outlined the new 14nm Core M. This is an impressive CPU, one that will fill the now… Read More

Intel CEO Misinformed on the Foundry Business
by Daniel Nenni on 09-09-2014 at 7:00 am
View Profile
View Forum Posts

At the Citi Global Technology Conference last week Intel (INTC) CEO Brian Krzanich made some comments about the foundry business that I found quite misinformed. It will be interesting to see if this theme is repeated during the foundry presentations at the Intel Developer Forum in San Francisco this week:

Intel (INTC) CEO Brian Krzanich keynoted the Citi Global Technology Conference last week. This was a precursor to the Intel Developer Forum in San Francisco this week. Normally these types of events are scripted dog and pony shows but sometimes interesting information comes out. The first question for example:

What does Intel… Read More

Do you know what an AMA is on Reddit? It stands for “ask me anything”. A person, often a famous person like Bill Gates (last week) but sometimes just someone who does an interesting job (like astronaut) or was in an interesting situation (like the hijack from Ethiopia last week).

Today, it is someone who argualble is all… Read More

From the sources in which I confirmed the last Intel 14nm delay, I just confirmed another. Intel 14nm is STILL having yield problems. Remember Intel bragging about 14nm being a full node and deriding TSMC because 16nm is “just” 20nm with FinFETs added? Judging by the graph, clearly FinFETs are not the problem here. … Read More 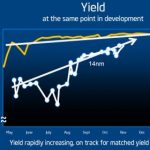 Hopefully this blog will result in a meaningful discussion on truth and transparency, and how Intel can do better in regards to both. Take a close look at the manufacturing slides presented by William Holt, Executive Vice President General Manager, Intel Technology and Manufacturing Group. You can see the slide deck HERE. Slide… Read More

Now that the IDF 2013 euphoria is fading I would like to play devil’s advocate and make a case for why Intel is still not ready to compete in the mobile market. It was very clear from the keynotes that Intel is a chip company, always has been, always will be, and that will not get them the market share they need to be relevant in mobile electronics,… Read More