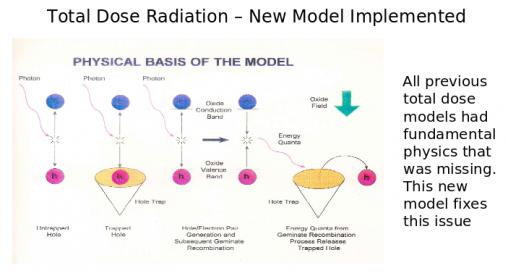 I talked to Derek Kimpton of Silvaco today. He turns out to be a fellow Brit. He is presenting a webinar on total dose that is of interest to anyone creating chips that will go into space (primarily satellites), or near space (primarily avionics in planes). Pretty much everyone knows at least the basics of single-event-effects (SEE) whereby a high-energy neutron (either from outer space, or from radioactive rocks, or even materials in the package such as solder) can cause a bit to flip in a memory or a flop to change its value. That is not what this webinar is primarily about, although this will be covered too.

Semiconductor devices suffer over time from thresholds that move and measuring these total dose effects is very important since eventually they will cause the device to fail. Even rad-hard devices suffer from the effect, just more slowly. When he was still in the UK at Plessey Semiconductor (remember them?) he discovered that people couldn’t predict the total dose effect at all. Even after 30 years it was not well understood. In particular, in his research, he discovered it was not entirely a one-way effect and that under some circumstances the effect is reversible depending on bias on the gate. So he created a model that turned out to be very accurate.

He joined Silvaco 17 years ago and put the model into radiation code. But until recently it has been classified, only available to the military for design of satellite electronics. Now it has been desclassified and is available to anyone (almost, North Korea need not apply). The webinar will describe this bias dependent effect, which nobody else’s models covered. He will go through it in a fair amount of detail.

As devices get smaller, the amount of deposited energy required to cause problems gets smaller and smaller. This means that increasingly people for whom this stuff is not on their radar screen need to know. For designers, the total dose model can be used to produce SPICE models after different periods of exposure so it is possible to simulate how the chip will behave when new, after a year, after ten years and so on. This is especially important when using commercial grade silicon in avionics and even space since the silicon has not been created with a level of built-in immunity.

The diagram above shows some of the issues that will be covered. A photon hits (and I don’t mean a flash of light, we are talking X-rays, gamma rays, high energy electrons or other high energy particles) and creates an electron and a hole in the oxide, so a tiny current. Sometimes the current dissipates and the electron goes one way and the hole the other. But under some circumstances the electron escapes but the hole gets trapped causing a tiny threshold shift. That is the two diagrams on the left. Alternatively, under different field strengths the electron and hole will almost immediately recombine releasing a little burst of energy (the energy that was in the original incoming photon). But instead of making the situation worse, this energy can actually release one of the trapped holes thus moving the thresholds back towards normal. It is this effect that other models did not capture and that has recently been declassified.

The webinar is Tuesday February 17th from 10-11am Pacific. The title is Simulating Total Dose, Prompt Dose, Damaging Fluence and SEU using TCAD which sounds of limited interest but, in fact, this topic is something that designers, not just process designers who are the usual target of TCAD tools, need to have a working knowledge of. Derek Kimpton will be presenting the webinar himself.

More details, including registration, are here.