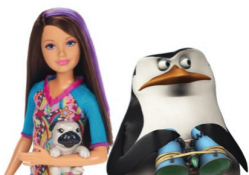 What is Skipper? Well, it seems it’s a penguin in the movie Madagascar. And one of Barbie’s sisters. Who knew? But for Semiwiki readers it’s an integrated chip finishing platform from ICScape. Skipper can read in full-chip layout extremely fast, examine it and manipulate it in various ways, and write it out again.

Skipper solves a number of different problems, both before tapeout and when debugging silicon exhibiting problems: