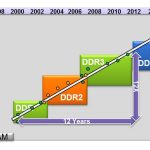 In fact, this assertion is provocative, as the DDR4 protocol standard has just been released by JEDEC… after 10 years discussion around the protocol features. Yes, the first discussions about DDR4 have started ten years ago! Will DDR4 be used in the industry? The answer is certainly yes, and DDR4 will most probably be used for years.… Read More